School superintendent says now is not the time to retire 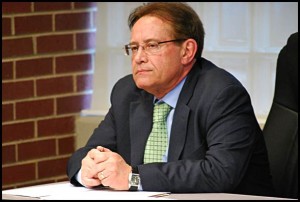 Hamtramck Public Schools Superintendent Tom Niczay asked the School Board to rescind his letter of resignation that he submitted last November. Niczay’s retirement was scheduled to go into effect next December.

At Wednesday’s monthly School Board meeting, Niczay requested to undo his resignation that he submitted back in November.

And that was welcomed news for the Hamtramck School Board, which unanimously voted to keep Niczay in his role as superintendent. (Boardmember Nasr Hussain was absent.)

At the time he announced his retirement, Niczay cited that he had been employed with the district – first as a teacher and then as a principal – for 35 years, and that by the time his contract expires next December he would be 60 years old.

In his letter to the board, Niczay said he simply had a “change of heart.”

“I do not want to leave,” Niczay said. “The District is going through a very challenging period. A change in leadership during the next several months is not in the best interest of the District.

“I want to continue to lead HPS and work with the dedicated individuals of this District to overcome the challenges we face, uphold the positive steps we have taken and create the strongest and most vibrant educational community we can.”

Boardmember Yvonne Myrick had talked at length at the annual Dr. Martin Luther King Jr. breakfast held in February that she hoped Niczay would reconsider his retirement.

She told The Review on Wednesday that going through the process of looking for a replacement would have been “devastating” to the district.

“We have too many things coming into the city,” she said. “It would have been devastating to start over again.”

Boardmember Alan Shulgon agreed that bringing a new superintendent up to speed would have halted progress.

“We have to keep going forward,” Shulgon said.

The district indeed faces some challenges. In recent years – since Gov. Rick Snyder was elected – school funding has been slashed. That put the district into a budget deficit.

But under Niczay’s administration, the district is climbing out of its deficit. That effort required cuts and contract concessions from teachers and maintenance workers.

An ongoing challenge to the district is the encroachment of charter schools that have lured away students in the last several years. Every student comes with a price tag, of sorts, worth about $7,000 each in state funding.

In his letter to the school board, Niczay said he will ask for an extension to his contract next September.