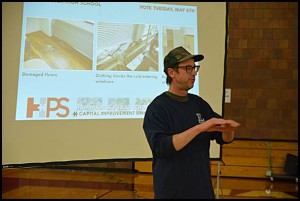 Steve Hughes is a big booster of Hamtramck Public Schools and is helping to lead a campaign to pass a school millage for building repairs.

When it comes to Hamtramck’s public schools, you couldn’t ask for a more passionate booster than Steve Hughes.

He and his wife, Anne, have three kids in the district. They, like many other families, are invested in the schools.

Steve has ramped up his support of the district by helping to head a campaign to pass a school millage proposal that voters will vote on this May 6.

“We share a common interest: We all love Hamtramck,” is how Hughes started out the meeting.

Hughes then ran through a number of slides highlighting the improvement needs each school building requires.

The 4-mill tax will allow the district to make a long list of improvements over the next several years.

Hughes said it’s not just about repairing roofs and windows. He said it’s about students learning in a good environment.

“I want their education to be a good one,” Hughes said.

Each school building has its own special needs, but there are plenty of common repairs needed, such as roofs, floors, windows, bathrooms, lighting, cracked walls, uneven heating — the list goes on.

“The school district hasn’t been able to do that because the state has taken away money,” Hughes said about the deep cuts in state financial aid under Gov. Snyder.

Hughes said that when his kids see a hole in a wall – which is not a threatening thing to their well-being – it’s a psychological distraction.

“It’s hard for them to feel proud,” he said. 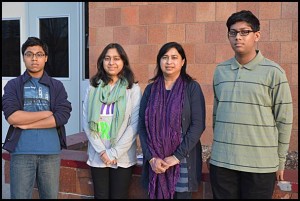 School millage supporter Ruksana Yasmin is flanked be her children, who are all enrolled in Hamtramck Public Schools, from left: Zubaeer Akhtar, Jaynak Akhtar and Insan Akhtar.

Rusksana Yasmin attended the meeting with her three children, all of whom go to the public schools.

She said that despite the financial hardship of some homeowners, it’s a millage she thinks is worth it.

“It’s affordable, and by breaking down the cost, voters will understand it,” Yasmin said.