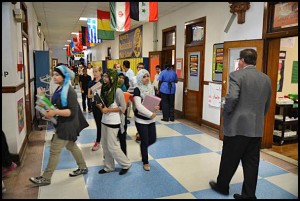 While the financial picture for the Hamtramck Public School District continues to improve, the district will face financial challenges in the years to come.

By Charles Sercombe
The financial picture for Hamtramck Public Schools continues to improve.
That was the news at Wednesday’s monthly school board meeting from the district’s auditor, Thomas Monteleon of the Yeo & Yeo CPA firm.
Last year the district was facing a $3.4 million deficit, which has since been whittled down to $1 million.  There’s been a steady decline from a few years ago when the district posted a $5 million deficit.
Monteleon said the financial outlook this year is “considerably better.”
Since last year, the district slashed expenses by contracting out custodial work and bus driving services.
Teachers also took a hit by having to kick in money for health coverage and a reduction in yearly raises.
While the district managed to reduce its deficit, at the same time it is posting a budget surplus of $2.3 million.
“That’s remarkable,” said Monteleon. “There was a huge reduction in the deficit.”
The district’s budget is now at $31 million. About 60 percent of the budget goes toward funding instruction. Salaries take up 47 percent of the district’s costs.
Technically, carrying a budget deficit is illegal in Michigan, but the district has avoided being penalized through a deficit agreement with the state.
By the end of next June, said Hamtramck Schools Superintendent Tom Niczay, the deficit will be eliminated.
The district has over 2,800 students, some 41 fewer students than last year.
While the financial outlook is improving, there will be more challenges down the road, Niczay warned.
He said the district is projecting an additional loss of about 200 students through 2018. Each student is worth $7,000 in state revenue. The loss of 200 students equates to the loss of $1.4 million to the district.
Where are these students going?
Hamtramck and its surrounding neighborhoods are host to about a dozen charter schools that have been steadily siphoning off students.