Senior remembers the days when the Negro League played here 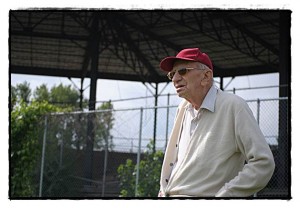 Ben Jaros was a teenager when the Detroit Stars played their home games in Hamtramck.

Hamtramck Stadium may be a historic site now, but for local resident Ben Jaros it’s still a vivid memory.

Back in the 1930s – when the Detroit Stars played in Hamtramck – Jaros was a teenager living on Trowbridge. He turns 95 years old in September, and his memory is razor sharp.

“If you had a nickel in your pocket you felt rich,” he remembers of those Depression-era days. “I didn’t have two pennies.”

Fortunately for Jaros, he only needed Hamtramck local Andy Love to see the games. Love played for the Stars and lived on Dequindre near Caniff, and Jaros would often see Love walking down Campau toward the ballpark.

“I’d follow him to the stadium and he would let me hold his bat and glove,” says Jaros. “When we got to the gate, Andy would say ‘He’s with me!’ and I’d sneak right in.”

During those games, Jaros would watch Love play practically every position on the field. Being a Hamtramck High School graduate, Love was Jaros’ idol and his favorite player. But he wasn’t the only one Jaros remembers.

“Turkey Stearns – he could hit a ball a mile,” he says. “There was chicken wire over the right field fence, and Turkey hit it over once.”

Although those days are now long gone, Jaros still remembers them like yesterday. It’s as impressive as it sounds, but he shrugs it off with a casual nonchalance.