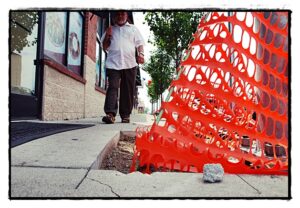 A proposal to begin a sidewalk replacement program was rejected by city officials. File photo

By Charles Sercombe
Don’t count on Hamtramck’s uneven and cracked sidewalks to get repaired any time soon.
A majority of the city council rejected a proposal by the city administration to hire the city’s engineering firm, Hennessey, to identify which sidewalks need to be replaced.
Most cities periodically mark sidewalk slabs that are deemed damaged or a possible threat to pedestrian safety.
Hamtramck has not had a citywide program for 10 or 15 years, back to when officials targeted sidewalk slabs that had become upended by tree roots.
Otherwise, when repairs do happen, it’s usually because a utility company dug up some slabs to install, or repair, gas or water lines.
In a note to the city council from the city administration, explaining the need from the program, it was said:
“As a walkable city, and to encourage our residents to walk in our city, sidewalk repair is an important part of the overall infrastructure improvement that is necessary. Having sidewalks in good repair, including having an active sidewalk repair program, is one way to protect the city from trip and fall lawsuits.”
A majority of the council rejected the proposal because of one thing: the cost to property owners.
It was estimated that it would cost $175 per sidewalk slab, which homeowners would then be responsible for.
The city proposed to earmark $68,000, paid through a yearly state road repair grant, to hire Hennessey Engineers, Inc., to mark the slabs that needed to be replaced.
The program was going to be spread out over three years, doing one section of the city per year.
In all, there are 80 miles of sidewalks in the city.
City Attorney James Allen stressed that, by replacing damaged sidewalks, the likelihood of trip and fall lawsuits is reduced.
“The program pays for itself, in terms of risk reduction,” Allen said.
A few years ago, the Michigan legislature adopted a law that reduced the liability of trip and fall accidents that cities face. But there is still a risk for a lawsuit.
Councilmember Ian Perrotta suggested training a city employee to determine which slabs needed to be replaced, as a way to save money.
“It wouldn’t be that hard to train someone to do it,” Perrotta said.
When it came time for a vote on the proposal, only Councilmember Fadel Al-Marsoumi was in favor.
Posted Feb. 26, 2021