Sign of the times, landmark buildings take a beating 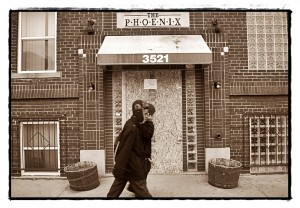 By Charles Sercombe
It’s not been a good season for Hamtramck’s older landmark buildings.
Time, the elements and an incredibly bad economy have taken its toll on two well-known buildings.
Some 15 years ago the Phoenix apartment building on Caniff lived up to its name and rose from its ashes.
The four-story building at one time caught on fire but after extensive remodeling, it re-opened as an apartment complex geared toward seniors.
In the years after, the building reverted to low-income housing, until recently becoming abandoned by its owner with the water and heat turned off. The building is now boarded up with a host of code violations that a new owner will have to overcome.
Considering the economic climate, it doesn’t look like a developer is going to be stepping up any time soon. Although boarded up, the building poses a huge arson threat for city officials. DPW Superintendent Martin Ladd said the building has fallen into disrepair.
“When the owner walked away from it, it was in a shambles,” Ladd said.
The owner of the building, Daniel Armistead of Milford, according to Ladd, left town owing the city taxes and water bills. It was not immediately known how much he owes the city.
Armistead could not be reached for comment.
The Phoenix is only the latest in a growing list of abandoned commercial buildings and houses. Over on Holbrook, next to Kowalski Sausage Co., the former PAVA Post 113 is literally falling apart.
The city had to rush in a crew to place support beams on the back wall, which started to fall down.
Ladd said the city has been pressuring the owner to take care of the building, but it now appears the city will have to take the owner to court. The cost of repairs – and if need be the cost of demolishing the building – is placed on the property tax bill of the property owner.