Site of proposed marijuana dispensary is no easy roll out 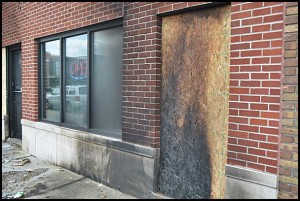 A building that was slated to open as a medical marijuana dispensary was the recent target of an arsonist.

By Charles Sercombe
A former Hamtramck DARE officer who played his guitar while he sang anti-drug messages to school kids is singing a slightly different tune these days.
Mark Kalinowski, who is also a retired Hamtramck police chief, is renting a building he owns on Jos. Campau to a would-be medical marijuana dispensary.
The business, Nature’s Medical Marihuana Center, was advertising its services in Detroit’s Craiglist. City officials were alerted to the advertisement and told Kalinowski it could not open up yet because the city is still preparing a special license for this type of business.
Kalinowski told The Review that it is not his business, but his name appears on the business license filed in the City Clerk’s Office. The name of the business Kalinowski is associated with is called Hamtramck Wellness Center.
“Originally I was going to put a doctor in there for certification,” said Kalinowski in reference to his intent on finding a tenant.
Kalinowski declined to comment on what he thinks about medical marijuana in light of his past role in the DARE program, which partnered police officers with schools to encourage kids to avoid taking drugs.
The marijuana dispensary was slated to open up at Kalinowski’s building located at 12177 Jos. Campau.
City Clerk August Gitschlag said that when he became aware that the company was promoting its services and what types of marijuana it would offer to patients, he called Kalinowski.
Gitschlag said he and other city officials are putting the finishing touches on the rules and regulations for operating a dispensary and expects to issue licenses in the coming weeks.
Kalinowski was told on Tuesday to hold off on allowing the dispensary to open and then several hours later on Wednesday at 5 a.m., someone tried to set his building on fire.
Fire Chief Paul Wilk said there was minor damage done to the building, and that a gasoline can had been left behind. The incident is under investigation. A security camera above the front door of the building was not working, Wilk said.
Wilk said this is the second fire at the location. He said another fire broke out on Christmas Day, but again only minor damage was caused.
Kalinowski said he had not received any threats about allowing medical marijuana to be sold at his building. He said his relationship with the company is only as landlord, and that his tenants have pumped thousands of dollars to renovate the office space.
Kalinowski also said he is now facing foreclosure on the building.
As for the future of the dispensary, Kalinowski said he did not know if it will go forward.
“They put out a feeler ad but got no response,” he said. “Right now, they’re spooked.”