Sleepy driver wakes up to a downed city flagpole 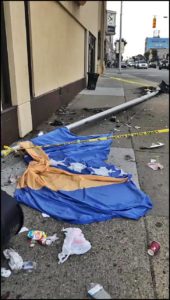 At 6 a.m. Tuesday, a 19-year-old Detroit man crashed into a flagpole at Jos. Campau and Caniff. There were no injuries, but it was fatal for the flagpole.

By Charles Sercombe
A fatigued driver stirred up an international incident here in Hamtramck.
Well, that may be overstating it.
At 6 a.m. on Tuesday, the driver ran off the road at Jos. Campau and Caniff, and crashed into a flagpole, downing it.
The flagpole was one of 18 lining the street that display the various national flags that represent the many international communities that call Hamtramck home.
The fallen pole also damaged part of PNC bank.
The driver, a 19-year-old man from Detroit, told the police that he fell asleep at the wheel. Instead of waiting for officers to arrive, the driver drove off and parked down the street.
Officers followed the debris trail and found the driver. The man was issued a ticket for leaving the scene of an accident.
Russ Gordon, the chairman of the Hamtramck Human Relations Commission, which initiated displaying the flags, said it could cost about $1,500 to replace the pole.
The Bosnian flag that was on the pole was saved and not damaged.
For years, the flagpoles were not used by the city, because of the cost to replace the flags each year.
Now, the flags are flown beginning on Memorial Day, when just American flags are displayed for the holiday week, and come down around Thanksgiving.
Gordon said the flags have to be replaced each year because of the wear and tear from the weather.
Fifteen local businesses and individuals have been contributing to a fund to purchase new flags. Each company donates $300 a year, and in exchange, a plaque naming the company is placed on one of the flagpoles.
The city owns the flagpoles, but no money from the general fund is used to maintain the them or the flags. The city will seek reimbursement for the pole’s replacement cost from the driver or his insurance company.
Gordon has been in the forefront to get the flags displayed. He raises the flags and takes them down each year.
“It’s a labor of love,” he said.
He said the one thing that motivates him is the image he thinks of an immigrant child coming to the city for the first time and seeing their former country’s flag on display.
“I imagine the kid sees that flag, and realizes that he is home,” Gordon said. “That image keeps the project alive for me. For a lot of folks, that warms them up.”
The Human Relations Commission has not been active in recent years. Nonetheless, Gordon is seeking an artist to join to help with designing graphics for upcoming projects.
Hamtramck has no shortage of artists living here. If you’d like to become a member of the commission, call Gordon at (248) 842-7373.
Sept. 13, 2019