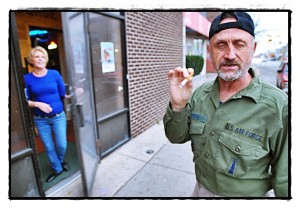 Six weeks after Michigan’s smoking ban at bars and restaurants went into effect, there was a decrease of about $8 million in Keno gambling money collected by the state.

The Keno game is limited to bars.

And here is where the “coincidence” comes in: State lawmakers are now reconsidering the ban and may modify the law to allow bars and restaurants to offer smoking rooms, which are rooms that are completely walled off from the main part of the building.

Of course there’s a catch. Bar and restaurant owners would likely be charged a fee to offer a smoking room.

The effect of the ban was also immediately felt by local bar owners. The local opinion of the ban among bar owners and patrons can be summed up with a string of profanities. After the heated words cool down, bar owners say their business dropped off anywhere from 20 to 50 percent.

Smokers are generally drinkers and what has happened since the ban, say bar owners, is that smokers get fed up with going back and forth outside to smoke. So, they order one or two drinks and then decide to leave and go home.

“It’s an inconvenience for people to go out and smoke,” said the owner of Three Star Bar B Que, Andy Shadain.

And now with cold weather setting in, bar owners say the situation is worse. No one wants to shiver in the cold for a quick smoke.

“Instead of having two drinks, they just have one and leave,” said Maria Nuculaj, the manager of Motor City Sports Bar.

Even with Sunday morning liquor sales now OK’d, there is little hope for an uptick in business, locals say.

Gordon said the new fees to open Sunday morning and now also on Christmas Day are out of reach for most bar owners. She said state lawmakers don’t have a clue about the bar business.

“How much money do they think we make?” she said.

Strangely — or since this is Hamtramck maybe not so strangely – the most vocal supporters of smokers’ rights come from non-smokers. Well, at least that’s the case at Paycheck’s Lounge.

“Why does the government want people to smoke outside?” said Jerry Tomberline, a patron at Paycheck’s who says he doesn’t smoke yet was outside the bar … smoking. “Smoking never bothered anyone. It’s government control. Next thing they’ll control is what we eat.”

Also at Paycheck’s was Cezory Gorny, who quit smoking a month after the ban went into effect. Although he’s now a non-smoker, he agrees that government should back off.