Snow, snow everywhere but where are the kids? 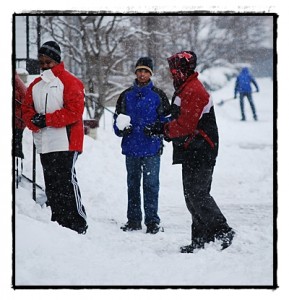 By Charles Sercombe
For the second week in a row, Hamtramck was walloped with a snowfall of several inches.
And as usual, Hamtramckans slogged through the wet mush without much notice. This time around, the city’s newest snow removal company took over clearing the major streets and according to City Manager Bill Cooper, they did a good job.
That good job, however, will cost the city a few thousand more dollars than the previous contractor. The former contractor was fired after the company failed to do a complete job in previous snowstorms.
For students, Monday’s snow meant a day off after the public and charter schools announced they would be closed. The snow was perfect for making snowballs and snowmen, but strangely, hardly any kids were out playing.
Instead, many kids were walking about town looking to make an extra buck by shoveling someone’s sidewalk. A sign of the desperate economic times?
On Edwin St. near Pulaski Park a group of kids were seen making a snow fort. When this reporter pulled over to grab a quick photo, the kids had disappeared.
Searching further for kids out having fun in the snow, a group of boys on McDougal near Casmere were armed with snowballs. They looked like they were about to get into a snowball fight and present a perfect photo-op. But instead, they barely goofed around and just stood there.
And then on Tuesday evening, the feature photo we were looking for: Four college-age guys were in Zussman Park building a snowman that appeared it was going to be at least 10-feet tall.
“The kids don’t want to do it,” said Salah Hadwan, referring to the weird absence of children out playing in the fresh snow.
So what prompted them to take up the slack?
“I don’t know, we were bored and decided to come out and build one.”