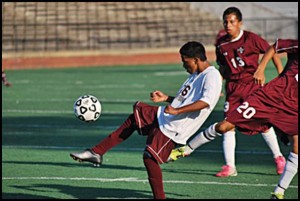 By Charles Sercombe
Hamtramck soccer fans may have their game upped in the near future.
At last month’s Hamtramck Public School Board meeting, the Detroit City Football Club proposed moving its league from Cass Technical High School in Detroit to Keyworth Stadium.
Todd Kropp, Chief Operating Officer of the group, asked for permission to begin a structural assessment of the stadium’s grandstands at no cost to the district. That project, he said, will cost the organization $10,000.
In exchange, he asked the board to apply for a grant to perform an environmental survey of the stadium’s grounds.
The board agreed after a brief round of questions. The leading concern was whether the district would be held liable if the environmental study showed there was contamination.
The district’s attorney, George Butler, said it’s unlikely anything would be found since the site has been a stadium for many decades.
The potential for redevelopment for the stadium is staggering. Kropp said if everything appears to be sound, his group would perform a major renovation. One of the changes would be to tear up the artificial turf and replace it with natural grass, which Kropp estimated would cost $1 million.
The school district would still retain ownership of the stadium.
Kropp said his league has outgrown the field at Cass Tech. He said about 3,000 or more soccer fans turn out for games.
He added that games will start out with a parade down Jos. Campau, and end with fans visiting local bars.
The league’s season runs April through October, and games are played on Saturdays.