Southend now has its own hardware store to call its own 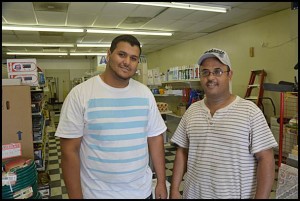 A father and son team, Akram Mosleh (right) and Salah, has opened a new hardware store in the city’s southend.

By Alan Madeleine
Special to The Review
Nothing revitalizes an old city like a new business. Even if that business is, well, an old-fashioned kind.
The southend is now home to just such a business, but with a “local twist.” It’s a hardware store, called A-1,only its Yemeni-owned.
Owner Akram Mosleh, his son Salah and a helper are busy with a steady flow of customers. A man exits, having just bought a small tray of flowering plants from a stand in front of the store — not something you see at every hardware store.
The store itself is bright, cozy and easy to find things in. A customer requests plant-hanging hooks, and Salah escorts her down an aisle to help find them.
Another man is looking for eyehooks. There is a funny bit of miscommunication; Akram hears the request as “eyeballs” at first. With that finally sorted out, the man is shown down another aisle.
When Akram first came to Michigan from New York City (to escape the overcrowding and expense of it, he says), he busied himself by acquiring and refurbishing a used home or two. He soon discovered that he liked to do that kind of work, and eventually went to Henry Ford Community College to obtain his General Contractor certification.
Interest in starting up a hardware store was a next step out from that beginning here in Hamtramck. He kept hearing from others in his community that the southend of town could use a convenient hardware store. Apparently, he heard it enough that the message stuck.
The store has now been open for about four weeks. Akram plans a grand opening celebration in the near future, but for now he is content to get the ball rolling on his new venture by advertising and by adding more stock to the shelves as he can.
As business builds — it’s been “pretty good” so far, he says — he’s already on the lookout for a larger building to buy or lease down the road. One of the things he hopes to carry is lumber. Hamtramck, he says, has nowhere convenient to buy it.
Encouragingly, his customers have been a healthy mix of people he knows from his community and people from outside of it as well.
“They seem very excited that we’re here for them, and also by our prices,” he manages to say modestly enough.
“I just want to make sure I give them more inventory,” he adds.
And with that, he turns to yet another customer who strides in, seemingly for the first time.
A-1 Hardware is located at 8906 Jos. Campau across from Checker’s Hamburgers. They are open seven days a week, and even on some holidays, Monday- Saturday  from 8 a.m. to 8 p.m. and Sun. from 9 a.m. to 6 p.m. Their phone number is (313) 638-2327.