Southend will be home soon to newly settled refugees 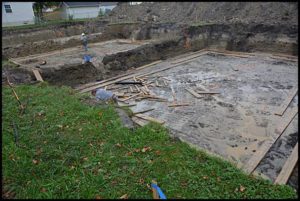 Three new two-family houses are being built on Faber St. thanks to federal funding. The development will be used to house six refugee families in the coming years.

By Charles Sercombe
Two years ago, the city had plans to build seven housing units for a program to help settle refugees.
Over that time, the plan has evolved, and an agency that was handling it handed it over to another, and well, a different plan was developed.
One of the sticking points with the original proposal was that the housing units would be built on scattered sites.
Now, the new plan calls for constructing three, two-family housing units together on Faber St. In all, six families will be relocating here.
Construction has already begun.
City Manager Kathy Angerer said it made more sense to keep the families clustered.
“The strategy is, that it is a better way to help them,” she said.
The $1.2 million project, which has been dubbed “Freedom Village,” is being paid for with federal housing dollars. The locations for the development are 2412-2430 Faber St., which had been all empty lots.
For the city, the development not only gets more residents living here, but the new housing also represents more property taxes to be collected.
Two years ago, it was thought that refugees from war-torn Yemen would be coming here. Now, however, the Trump administration has banned any more refugees from that country. That ban has stirred much controversy.
A non-profit group, Samaritas, will select who lives here.
Refugees will only stay for several months before resettling somewhere else, which will then make room for another batch of new refugees to begin to acclimate to their newly adopted country.
A main reason Hamtramck was selected for this project is because it’s a walkable community, where you can easily do your shopping close by and not need transportation.
Other agencies will also help with job training if that is needed.
Oct. 4, 2019