Speed humps: sending a message out to reckless drivers 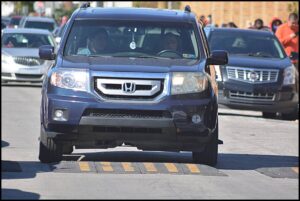 Permanent speed humps will be installed soon at 18 locations throughout the city. File photo

By Charles Sercombe
Hamtramck’s crackdown on speeding and reckless drivers is stepping up a notch.
The city and public school district have partnered on installing more speed humps throughout the city, after a trial run in two locations proved successful.
Coming in the next several weeks is the installation of permanent asphalt speed humps in 18 new locations.
Each location will have three speed humps.
The cost of the project is $32,266, and the contract was recently awarded to Century Cement Co., Inc., of Riverview, Michigan. The humps will be made of asphalt.
The public school district is pitching in 50 percent of the cost. In a note to the city council, the city administration said that it is reaching out to charter schools to also participate in installing speed humps near their buildings.
The locations of the new speed humps include:
o Pulaski Park (which is owned by the school district)
o Holbrook Elementary School
o Dickinson East elementary School
o Kosciuszko Middle School
o Early Elementary School
The installation of speed humps comes after years of residents complaining about drivers speeding throughout the city’s side streets.
The areas around schools were targeted for the installation of humps because of the obvious concerns over student safety. Ironically, many residents blame high school students as being the main suspects in much of the speeding and reckless driving.
That’s one reason Hamtramck High School was initially chosen to test out whether speed humps do their job. But students being students, they raced from one hump to another before slowing down.
Posted May 27, 2022