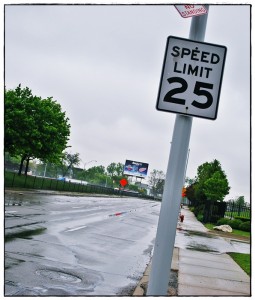 Unfortunately for drivers, it looks like the effort to mandate cities to conduct traffic studies to set speed limits has slowed down.

A few months ago, The Review reported that State Representatives Rick Jones (R-Grand Ledge) and Rep. Bettie Cook Scott (D-Detroit) were working on an amendment to Public Act 85, a law passed in 2006 that spelled out two methods for determining the proper speed limit of a road. Because many cities had not yet complied with the state’s guidelines four years later, Jones and Scott sought to pass House Bill 6165, which would require cities to set speed limits using one of the two methods.

The first method utilizes traffic and engineering studies to analyze roadways in order to take into consideration the amount of drivers and the average speed of their vehicles. After this analysis is completed – during clear driving conditions and not during peak travel periods like rush hour – a speed limit based on the 85th percentile of free-flowing traffic can be established. The 85th percentile is the speed at which 85 percent of drivers are traveling during the study.

The second method of setting a speed limit has to do with the amount of access points on a given road. By taking into consideration the number of driveways, parking lots and side streets that border a road, a speed limit can be determined through guidelines set by the state.

However, Jones and Cook ran into trouble with several groups which Jones deemed to be “special interest,” particularly the Michigan Municipal League (MML), an organization that represents cities, townships and villages throughout the state. An article in this week’s Detroit News reported that Jones said he met with the House Urban Policy Committee to discuss the proposed legislation in May only to have the bill thwarted by the MML.

“It never even got to a vote,” he said. “The Michigan Municipal League did everything they could to stop it.”
Also in this week’s Detroit News, Chris Hakbarth, a lobbyist for the MML, defended the lack of action by cities which haven’t complied with Public Act 85, saying they haven’t done anything wrong.

“There’s nothing in the public act that specifically says communities must do these studies and change their speed limits,” he said.

On the other end of the spectrum are people like Lt. Gary Megge, the former head of the Michigan State Police Traffic Services Section whose job used to be preventing speed traps. In an interview with Megge earlier this year, he said that while there was nothing in Public Act 85 that specifically requires cities to comply with the law. Problems arise when the speed limits are enforced.

According to Megge, when a ticket is issued by a police officer, the officer must list the law that corresponds to the violation. And because some tickets are issued for speed limit violations on roads that have not been studied, that is where the legal transgression occurs.

“There is nothing in the code that specifically requires a municipality to conduct traffic studies,” said Megge, “but enforcement of any law must match the criteria of the law.”

The question of whether or not speed limits that are currently posted are enforceable could have serious implications for the city of Hamtramck. This year, the police officer’s union has promised to produce at least $60,000 a month worth of traffic citations to prevent layoffs in the department.
Incidentally, a study by the Detroit News earlier this year found that the northbound service drive on I-75 qualifies as a speed trap – a fact that may negate the legality of tickets issued in the area.

Despite the failure of House Bill 6165, Jones, who was a police officer for 31 years, is still determined to pass legislation that requires cities to conduct traffic studies. After a few tweaks, Jones plans to reintroduce the bill under a new name.

“This has been the law for four years, but all these city attorneys keep saying there’s a gray area, but they don’t want to fix it, because there’s a lot of money to be made from writing tickets in speed traps,” Jones was quoted as saying in the Detroit News. “Our legislation would have cleared up that gray area.”