Spreading the message of Dr. King at the HPS Community Center 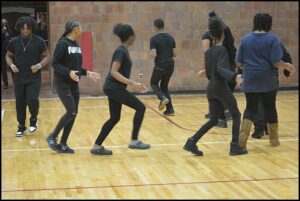 By Charles Sercombe
For the first time in three years, the annual Rev. Martin Luther King, Jr. Prayer Breakfast returned in-person on Monday, the national holiday celebrating MLK’s birthday.
And for the 25th year, the Concerned Women of Hamtramck sponsored the event at the Hamtramck High School Community Center.
As usual, there was a talent show performed by Hamtramck Public School students, although the number of students who participated this year was down from previous years.
Nevertheless, the various speakers spoke passionately about the spirit of MLK and what his message means.
The civil rights pioneer would have been 94 on his birthday, which is actually Jan. 15. He was assassinated in 1968 – a year that also saw Robert F. Kennedy gunned down, and violence erupt at the Democratic convention in Chicago.
One of the speakers at the breakfast was former HPS Superintendent Tom Niczay, who talked about the various members of the Concerned Womens group and its founders who have all passed on.
Over the years, the group has done a lot of work with students, and sponsored student grants.
The Concerned Women’s philosophy, Niczay said, is that “every student is a winner.”
Many of the women were pioneers in their own right.
Co-Founder Yvonne Myrick was the first African-American to be elected to the Hamtramck Public School District School Board. She was president of the HPS board for many years.
Myrick was also a department head in Hamtramck city hall.
Niczay touched on the theme for this year’s breakfast, which was “Reach Out and Touch Somebody’s Hand.”
The theme is a title of a song written by Nickolas Ashford and Valerie Simpson, and recorded by both Diana Ross and Aretha Franklin.
Niczay said the message of the song is to help those who are struggling.
“Be kind, show empathy, love,” Niczay said. “When we encourage others, we encourage ourselves.”
Madelyn Porter, who emceed the program, also spoke of her experiences with working with other people of different races and religious beliefs.
“The differences are what makes the world so beautiful,” Porter said. 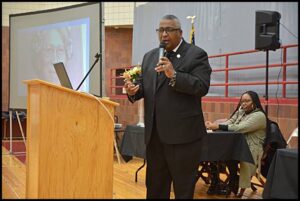 The keynote speaker was Rev. Wallace R, Mills, Jr., who is pastor at New Ebenezer Baptist Church.
He gave an impassioned and fiery talk about the meaning of MLK.
King, he said, understood the injustices African-Americans have suffered through.
“He understood what his people were going through, that we were rejected, not worth anything,” Mills said. “He reminded us that God made us all equal.”
While there have been huge strides in civil rights, Mills said the fight is far from over.
“Racial injustice is still alive,” he said.
He said this divisiveness is also being played out in Hamtramck politics. But there is a way forward, Mills said.
“We got to sit at the table where the decisions are being made,” he said.
Posted Jan. 20, 2023