St. Florian Church doesn’t need a miracle after all 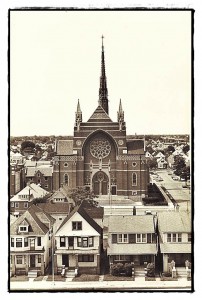 There is no need to pray for the future of St. Florian Church.

A number of folks in town became panicky from overhyped media reports of a recently released study by the Detroit Archdiocese on the future of area churches.

In that lengthy report, it was mentioned that the St. Florian Parish might have to be closed down and its buildings sold off.

Before you start thinking of who to crucify, listen to what Fr. Miroslaw Frankowski has to say.

“The Parish is not in trouble,” Fr. Frankowski told The Review, “as long as the Society of Christ remains.”

Fr. Frankowski is a member of the Society of Christ Religious Order, which consists of Polish priests who cater to Polish-American parishes. Fr. Frankowski said there are absolutely no plans for the Society to leave St. Florian or Michigan.

According to the Archdiocese report, St. Florian could also close if the Parish fails to settle up a $1.85 million debt.

The Parish incurred the debt after operating its elementary and high schools at a loss for several years. The schools were closed down its school several years ago, and the Parish has been leasing buildings to a private charter school organization.

Fr. Frankowski said the Parish has a payback plan, which it has met, and is able to pay its monthly bills.

If anything, St. Florian is thriving. With 870 registered parishioners, it is the second largest Polish-centric church in the state.

Cindy Marklin Bonneau, a member of the Parish Council, said there are also six active religious societies in the Parish, as well as other activities and services being offered.

She said the Archdiocese report was merely a beginning of discussions going on about how to keep churches open.

“I wish the Archdiocese had not released this,” she said in reference to the report. “A lot of these suggestions are going to be thrown out. It’s causing a lot of uproar for nothing.”

According to the suggestions, which were put together by dozens of committees comprised by laypersons, several well-known churches could be closed over the next few years.

The Archdiocese has not made any final decisions on the future of the churches.

As of now, none of the Hamtramck Catholic churches are slated for closure, but some may have to start sharing services with other parishes.

One thing is for sure. The Detroit Archdiocese has a dwindling number of priests, with an average age at 69, to service the 270 parishes in the area. There are also money troubles for the Archdiocese as well.

Mayor Karen Majewski said on her Facebook page that the church needs to look at the “root” cause of why fewer people are participating in services.

Some critics of the church say many have left due to a number of reasons, which include not allowing priests to marry and the church’s stance on birth control and abortion .

7 Responses to St. Florian Church doesn’t need a miracle after all