St. Ladislaus Parish is about to celebrate its centennial 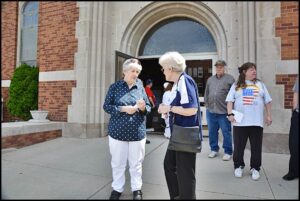 By Alan Madlane
St. Lad’s is a young lad no more.
The iconic Hamtramck Catholic church is about to celebrate its 100th anniversary this month, on Saturday, Sept. 26, at 4 p.m.
Leading the mass will be the Reverend Donald F. Hanchon, Bishop of Detroit.
On September 25, 1920, Detroit Bishop Michael Gallagher assigned another reverend, Boleslaus Gdaniec, with the creation of a new parish to take some of the burden off of St. Florian.
That new parish was designated as “St. Ladislaus” the following June 1, and its first mass was held at the old Eckerts Hall on Jos. Campau.
Over 100 years ago, the Township of Hamtramck was huge, bigger than Detroit at that time in fact, with borders that encompassed the areas now known as the (Grosse) Pointes; it was basically most of the east side.
So it made sense to have a second parish to handle the population.
Enter Fr. Gdaniec, and St. Ladislaus.
The church held its first baptism, oversaw its first marriage ceremony, and presided over its first tragic funeral, for an infant who had died, all in 1921. It also opened its own elementary school in the Eckerts Hall building that fall, with some 300 students overseen by three nuns who’d come in from Sylvania, Ohio, and one layperson teacher.
A building for St. Lad’s was begun the following year, but Fr. Gdaniec left his post and was replaced by the Rev. Anthony Majewski – no relation to our mayor – in March of 1922.
This first building was consecrated on Sept. 27 of that year. The current building, in its location at Caniff and Brombach, was actually completed in 1930.
And here they are today, 100 years of history behind them, peering into the future to see what lies ahead.
Sept. 18, 2020