Stadium marker is a reminder of a divided America 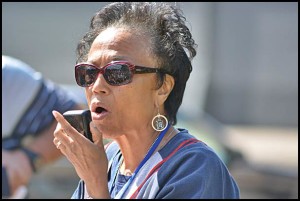 Rosilyn Stearnes-Brown, the daughter of legendary Negro League baseball player “Turkey” Stearnes, address the gathering at the recent unveiling of a historic maker for Hamtramck Stadium.

By Charles Sercombe
It was a packed house, so to speak, at last Thursday’s unveiling of a historical marker in Veterans Memorial Park.
That’s when the public got its first glimpse of a marker designating Hamtramck Stadium as a national treasure. It is one of only a few stadiums left standing where the Negro Baseball League once played.
On hand was the family of one of the most famous players from that era, Norman “Turkey” Stearnes. His wife, Nettie, now in her 90s, and two daughters, Joyce Stearnes Thompson and Rosilyn Stearnes-Brown, beamed with pride during the ceremony for the unveiling.
An hour-long presentation was held at the park with Gary Gillette, the Executive Director of the Friends of Hamtramck Stadium, as host. Among the guests, which included county, city and public school officials, were members of the Jerry Malloy Conference being held downtown.
The conference was about Negro League Baseball, and some from the conference wore Negro League team jerseys and cap replicas.
Gary Sarnoff traveled from Arlington, Virginia to attend the conference and the Hamtramck event.
“I’m a big fan of the history of the game,” he said. “It’s so exciting.”
The specialness of the day was not lost on those attending. It wasn’t until several years ago that it was determined that the stadium, which has been in disrepair for decades, was home to the Negro League.
That discovery was a game-changer in the years-long debate on what to do with the grandstands: tear it down or repair it in hopes baseball will one day return.
The stadium is also a reminder of a time when America was a country that was separate but not equal: One for privileged white Americans and another for second-class African-Americans.
In a way, blacks for many years lived in a parallel universe with their own institutions. Baseball was one of them. It wasn’t until the 1950s and 1960s that Major League Baseball was fully integrated.
Once blacks made it into the big leagues, the Negro League – and its history — quickly disappeared. That rich history is now cherished.
Jack Dempsey, President of the Michigan Historical Commission, summed it best about coming to terms with our past and moving forward, saying: “This sign post helps us to go farther together.”
As for plans to renovate the stadium, there is an effort to obtain grants and possibly help from Major League Baseball.
The ultimate dream for this field is to restore it true to its era and have teams, dressed in historically-appropriate uniforms, play there. The stadium could also be used for movie productions that need a historical stadium to film in.
No matter what, the stadium represents yet another fascinating aspect of a city that is rich with culture and historical significance.