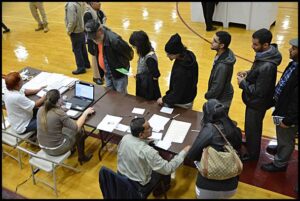 Hamtramck will use election security funding from the state to purchase new laptops for each city precinct.

By Charles Sercombe
All across the country there is growing concern about the safety of election workers for the upcoming Nov. 8 General Election.
There is particular worry over some poll watchers attempting to disrupt voters and the counting of ballots.
Michigan is no exception.
To beef up election security in the state, Secretary of State Jocelyn Benson has created an $8 million fund for local and county communities to tap into to prepare for the election.
“My administration has worked with election clerks and law enforcement across the state to ensure they have the information and resources they need to protect voters and their rights, and voters can cast their ballot tomorrow confident they will be safe and their vote will be counted,” Benson said in a recent press release.
“We will not tolerate any voter suppression or election interference attempts in Michigan.”
In Hamtramck, City Clerk Rana Faraj said that security has not been much of an issue – at least so far.
“Other than some campaigners harassing my door people, I can’t think of anything at the moment,” Faraj told The Review.
Hamtramck has been no stranger when it comes to poll challengers confronting voters.
In a 1999 general election, a group of challengers called “Citizens for a Better Hamtramck” made a number of improper challenges to Arab and Bengali voters that the US Justice Department said was race-based.
The registration form submitted by Citizens for a Better Hamtramck said that their interest was to keep the election “pure.”
In a consent decree with the government, the city agreed to take a number of steps to ensure voters’ rights.
There were no further incidents after that election but, for a number of years, Hamtramck elections were monitored by the Justice Department.
In the 2020 election year, there were a number of incidents both in the metro area and nationwide, where poll watchers and challengers disrupted proceedings.
Hamtramck’s 2020 election remained uneventful.
With this grant money being offered by the state, City Clerk Faraj said she will be purchasing new laptops for each precinct.
The state is allocating up to $1,500 per the current number of precincts in each city.
Hamtramck has seven precincts.
Posted September 16, 2022