State gives city a deadline to get labor concessions 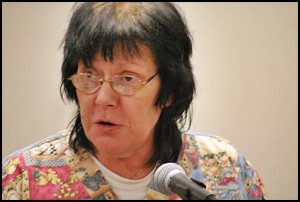 Carol Marsh urged the City Council to maintain the Fire Department at Tuesday’s council meeting. City officials are under state orders to get deep contract concessions from firefighters.

If Hamtramck can’t get major contract concessions from its employees in the next 60 days, State Treasurer Andy Dillon told city officials the state will step in.

That’s what Acting City Manager Kyle Tertzag said about his meeting with Dillon last week. Some city councilmembers were also present at the meeting.

Dillon told city officials that the plan would be to eliminate the police and fire departments of Hamtramck and Highland Park and have Detroit provide those services.

City officials have been focusing on gutting the Fire Department since that appears to be the most expendable.

About 80 to 90 percent of the runs made by the Hamtramck Fire Department are for ambulance service, said Fire Chief Paul Wilk.

However, the department’s two ambulances have been taken out of service because they need repairs. Tertzag hired Detroit Medical Center to take over the service, at least temporarily.

With that service contracted out, city officials are now thinking how many firefighters are truly needed.

But expecting firefighters to basically agree to a massive layoff seems unlikely. Firefighters have been waging a campaign on Facebook saying that the city can’t exist without a full-time professional department.

At Tuesday’s regular council meeting, dozens of supporters of the Fire Department attended.

Carol Marsh implored the council to preserve the department as it is.

“Don’t dismantle it,” she said.

“Is somebody lining their pocket?” she said.

The president of the firefighters’ union, Matt Wyszczelski, told The Review that the union has offered concessions. City officials say the concessions haven’t gone deep enough.

Wyszczelski also said that having Detroit’s Fire Department take over won’t work because that department is already stretched too thin.

Wyszczelski added that it’s the state government’s fault for Hamtramck’s financial crisis. He said the state has slashed revenue sharing, which in turn created the city’s budget shortfall.

Tertzag said he is not optimistic he’ll work out a deal with the firefighters.

“I’m not hopeful we’ll get what we need,” he told the council. 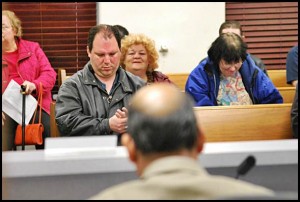 A number of supporters of the firefighters packed the council chamber.