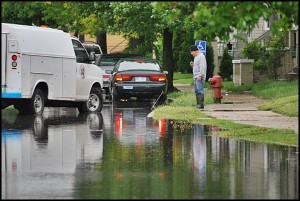 The city is eligible to receive an $11.5 million loan to begin sewer repairs. The repairs will be the first step in solving the city’s ongoing flooding problem.

By Charles Sercombe
The city is taking the first step toward plugging basement flooding.
Thanks to an $11.5 million grant from the state’s Department of Environmental Quality, Hamtramck can begin the first part of sewer line repairs that will ultimately cost upwards of $40 million.
The only catch is the city has to figure out a way to pay back the grant, said Emergency Manager Cathy Square.
“We want the full amount but we have to come up with a way to pay it off,” Square said.
Guess who will likely pay back that loan?
If you guessed Hamtramck water users, you guessed correctly.
Square said although there might be some other state or federal funding sources to tap into, there will probably be a service fee added to water and sewer bills in the near future.
There is already a likely possibility that the city is eligible for a newly created state grant designed for distressed cities that are under the care of an emergency manager.
You could say the grant is tailor-made for Hamtramck. That one-time only grant is worth $2 million.
But for households, if past discussions are any indication, additional monthly fees could range from $5 to $17.
That’s a small irony considering that back in the 1950s voters here rejected a tax increase to once-and-for-all fix the problem.
Ultimately, the final piece of the repair puzzle is to connect with a super sewer and rain water runoff line that runs under Conant.
Long before that takes place, the first step involves installing liners inside the city’s water and sewer system. That’s needed because portions of Hamtramck’s system are crumbling and falling apart.
While Hamtramck has a history of basements flooding when heavy rainstorms hit, it has not been as frequent until this year.
The metro area experienced a freak deluge in mid-August that caused flooding in thousands of homes here and in the suburbs. After that storm, two more unusually hard rainstorms swept through.
Prior to this year, there were two notable floods, one in 2008 and another in 2011.
Hundreds of residents filed a class action lawsuit against the city, which resulted in a settlement agreement that cost Hamtramck property owners a total of $1.6 million.
The settlement also included an agreement by the city to begin fixing the problem.