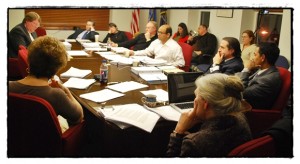 By Charles Sercombe
It looks like a check issued to a Christian-based organization by the city will end up in the hands of state police investigators.
Or so a majority of the City Council wishes.
On Monday, the council met in a work session to go over documents regarding the payment of $13,000 to Acts 29 Foundation for blight maintenance work it performed in 2009. Acts 29, headquartered in Hamtramck, was hired by the Michigan State Housing and Development Authority to hire homeless and unemployed people to clean up lots.
While that deal may sound innocent, it has taken on the air of trial of the century in City Council chambers.
Councilmember Cathie Gordon has insinuated that there may be criminal wrongdoing and is seeking to have the state police step in.
The main part of her contention is that City Manager Bill Cooper did not have the authority to issue the group a check for $13,000 because the City Council never approved a contract with the group.
The state required the city to kick in money to get the work done. Cooper has admitted repeatedly that the contract fell between the cracks and admitted he was wrong to not first get council’s OK to hire the group.
During Monday’s three-hour meeting, tension grew as Gordon continued to grill Cooper and his staff over the matter. At one point Councilmember Catrina Stackpoole called Gordon “crazy” and said she was making a big deal over nothing.
Cooper also questioned why the council continued the investigation saying it was being “beat to death.” He has also repeatedly admitted his staff had ample opportunities to catch the error but failed to do so.
He also pointed out that thousands of checks are issued by the city without error.
“One check, we missed it,” he said.
Councilmember Kazi Miah, who claimed this incident was a charter violation, replied: “You say it’s one, but it’s one too many for me.”
Mayor Karen Majewski asked Miah what specific charter violation occurred, to which Miah remained silent. As it turns out, there is no specific charter violation but there may have been a violation of the city’s purchasing ordinance.
Cooper pointed out that in order to get a state police investigation, the council will have to claim there was criminal wrongdoing. The council later compiled five “findings” – most of which were already outlined by Cooper in a letter summing up the chain of events on the matter.
The council had a special meeting scheduled for Thursday evening to decide whether to seek a state police investigation. The Review went to press before the meeting.
Councilmember Stackpoole said she would vote for a state police investigation even though she doesn’t think a criminal act occurred. She said she wanted the transaction to be cleared for the record and then be able to tell Gordon that she is “crazy.”
“I’m tired of this crap,” Stackpoole said. “I’m tired of listening to her (Gordon) for three hours and make BS accusations and hurt good people.”
In a role switch, Gordon, the would-be prosecutor in this matter, was the subject of an investigation a year ago over whether she was truly a resident of the city. At that time, she called the matter a “witch hunt.” The council called off the investigation after reaching an agreement with Gordon where she admitted partial fault for muddying up her residency status.