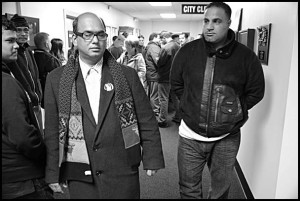 City Councilmember Mohammed Hassan (left) was denied a waiver to pay a fine for failing to submit his candidate financial statements on time.

By Charles Sercombe
City Councilmember Mohammed Hassan can’t catch a break.
Hassan faced fines totaling $1,830 for failing to submit campaign financial reports stemming from 2012 through 2014.
He paid those fines in June, but he tried to get out of it by claiming health problems, losing campaign documents and ignorance of election rules, according to a letter he sent to the Michigan Department of State Bureau of Elections.
Hassan’s letter to have his fine waived by the state read, in part and verbatim:
“Sir I am very new with the system. I had open heart and health issue. My election office was closed after 31st August of 2012 and my bank account was closed Oct. 29, 2012 because of no money at account.
“After that day I don’t have any access of that building. I lost some of documents. I thought after 31st December of 2012 it will be closed automatically. I don’t have any help or money to fill out form. Sir I made a mistake at least I should call your office for help. Sir, I am requesting and begging to accept my late filing campaign statement and excuse me fine and late filing fees.
“Sir, again I am requesting and begging if I have to pay any money to Michigan State please give me option to pay every month. …”
The state didn’t buy it, though.
Fred Woodhams, a spokesman for the Secretary of State’s Office, said that since Hassan was late in filing campaign statements for three years, “that was a stretch.”
Hassan faced a possible felony perjury charge in May when he filed for the state representative race for Hamtramck’s district. In his candidate application, Hassan signed off saying he did not owe any fines or fees, which in fact he did.
That wasn’t the first time Hassan has faced financial woes. Water service to his residence at 2425 Neibel was cut off briefly a year ago after he failed to keep up with his service payments to the city.
At the time he owed the city $758. He entered into two payment plans but failed to keep up to date with them.
Hassan also faced the possibility of being kicked off city council for being a “defaulter” to the city.
The city attorney decided not to pursue that course. Hassan had boasted during the city’s recent financial crisis of being able to run the city with a two-page spread sheet.