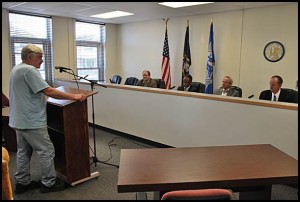 A state financial review team didn’t mince words in its analysis of the city’s financial crisis.

In the team’s report to Gov. Rick Snyder, which was released last Thursday, the report laid out the following findings:

Despite knowing there was a growing budget deficit in the past few years, city officials failed to deal with the problem.

“… It appears that the city’s worsening financial condition was obvious to city officials, but that they were either unwilling or incapable of taking resolute action to address the matter,” the report said.

A recent deficit elimination plan was “unrealistic” and still failed to address $1.7 million in overspending in the budget. (Editor’s note: state officials have just OK’d the plan, according to Acting City Manager Kyle Tertzag.)

To deal with the cash-flow problem, city officials dipped into other funds, such as the street repair fund, and borrowed over $500,000. At the same time, the city withheld over $2 million in payments to the pension fund.

It wasn’t all financially-related.

The review team lashed out at the council – and mayor – for being “dysfunctional.”

“While several City Councilmembers we interviewed seemed individually knowledgeable regarding the city’s financial condition, the members of that body seemed unable to function collectively in a coherent manner,” the report said.

“The Review Team was informed that City Council meetings are chaotic, protracted, and produce little in the way of tangible results. In such an environment, rational financial management is not likely to be forthcoming.”

As for the mayor, the team said:

“While the mayor is separately elected, the office is so inextricably linked to the City Council as to be part of the local governing body. For example, the mayor attends City Council meetings and is responsible for presiding at them.”

With that in mind, the team said that even if the financial crisis is turned around, there needs to be protracted supervision of the city – especially since this is the second time the city has turned to the state for help.

Another area of mismanagement cited were the wages paid to police officers and firefighters. The report said that Hamtramck police officers earn $10,000 more than Flint officers, who patrol a city much larger than Hamtramck with a population of five times the size.

As for firefighters, they received a 16 percent salary increase despite shrinking revenues.

Not surprisingly, the team concluded that there is a financial crisis in Hamtramck.

Hamtramck officials can dispute the findings, but that appears unlikely since the council asked for state intervention months ago.

However, that doesn’t mean all city council members agreed with the findings.

Councilmember Cathie Gordon was the most outspoken in her assessment of the review.

“I take very great offense to this,” Gordon said.

Gordon said that city officials asked for advice a few years ago from the state, but all the city got was a “generic list of things to do.”

And, she stressed, the state reduced financial aid to the city in recent years, which exacerbated the city’s financial crisis.

“They (the state) are the reason we’re in the situation we’re in,” she said. “And they wonder why we’re in a problem?”

Councilmember Robert Zwolak said the review team failed to note that not all councilmembers – himself included – agreed to the budgets that were passed.

“There were serious omissions,” he said about the report.

Zwolak said a number of votes on spending decisions were split. He said he consistently urged the council to start making cuts.

“Some of the findings and explanations were pretty damning,” she said. “In some cases it was fair, in some cases not fair.”

Gov. Snyder has until early next week to decide whether to act on the review team’s findings. City officials say they expect the governor to agree that there is indeed a financial emergency.

How soon, however, is another question.