Still working on that beach body? Fitness coach has a plan for you 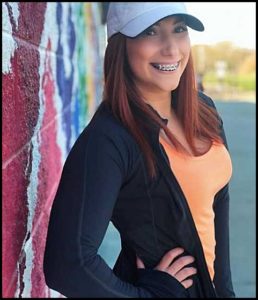 Out of shape? Hamtramck native Elizabeth Zaborowski may have a motivational plan for you.

By Joe Myrick
Special to The Review
Now that summer is here, a lot of us are still scrambling to get into shape.
A major challenge for most folks is maintaining a proper fitness regimen, and a nutritional diet, to keep that summer bod.
Hamtramck native Elizabeth Zaborowski hopes to make that fitness journey a little bit easier for those struggling.
Zaborowski lived in Hamtramck for the past 24 years, until recently moving to Royal Oak to focus on work and to finish up school.
She is pursuing a master’s degree at Oakland University in public health and epidemiology, while currently holding a Bachelor of Science degree in physical therapy and exercise sciences.
While both her education, and her background as an athlete in middle and high school — specifically volleyball, softball and soccer – are what kicked off her interest in biomechanics, it was her own personal struggle to get in shape that kicked off her fitness journey.
And that journey began when Zaborowski was nearing the end of her undergraduate schooling. She was struggling getting enough sleep, and felt overweight.
She gained 30 pounds during her junior year — and developed poor eating habits.
“Anything that you can think of doing as an average college student finally caught up to me,” Zaborowski said. “I felt out of control, and I didn’t like that. I felt like a lot of things like school, work, family matters, all of the things in life that could bring you down were bringing me down.
“Those are factors that I could either make the best out of, and control what I could control, or just let it take over. I decided to control all of the aspects that I could control.”
To discipline herself, Zaborowski found solace in the world of bodybuilding. She competed in her first bodybuilding show — the NPC Bikini Open — in April 2018.
She took home fifth place in one competition and third place in two others. By getting into shape, Zaborowski managed to lose a staggering 25 pounds. She plans to compete again on Oct. 12.
“As I approached graduation, I just became really unhealthy. Bodybuilding was a means for me to have that discipline to, essentially, know that I’m in control of me, so whatever I do, it’s not outside factors that are affecting me at that point. So, that level of discipline allowed me to show that I’m in control,” she said.
Friends, family and co-workers took notice of Zaborowski’s body transformation. Many of them began asking Zaborowski for advice and help, so she created an online coaching plan tailored for each person.
That inspired her to start her own fitness coaching business: EZ Coaching.
EZ Coaching is Elizabeth Zaborowski’s attempt at delivering an easy, user friendly and affordable fitness coaching app for those who may not have time to regularly hit the gym, or don’t know where to start as a beginner.
The app is one-on-one between Zaborowski and her client, with a three-month commitment — although that commitment can be extended at any time, if necessary — where she personally crafts a training and diet plan created specifically for the client to fit their schedule and lifestyle.
With this app, Zaborowski hopes to not only help clients fulfill their body goals, but also to “sustain anything you have achieved, so that you understand how to do it on your own” long after your training together has ended.
Since she began online coaching, Zaborowski has coached 13 clients in total – and now an additional four since EZ Coaching launched.
If one is skeptical that EZ Coaching is for you, Zaborowski goes through an application process — followed by a 30-45 minute coaching call — to get to know each client, learn their goals, how committed they are to these goals, and whether EZ Coaching is truly the right fit for that person, or if whether they need to seek a different alternative.
“If it were unfit for someone, I wouldn’t just accept them to take the money,” she said.
Since the app is still in its early stages of development, the best way to inquire about EZ Coaching is either by emailing her at ezcoachinginfo@gmail, or contact her through her @elimzab Instagram.
“Soon, there will just be a landing (website) that I plan to have out,” she said.
“I’m hoping — and it’s in the works — to have an eight-week training program e-book for anyone that doesn’t want one-on-one coaching.
“It’d be something you just purchase and it’s yours forever, and you do it on your own time, your own pace; however you want to get you where you need to be. Hopefully, that’ll be out by September.”
July 5, 2019