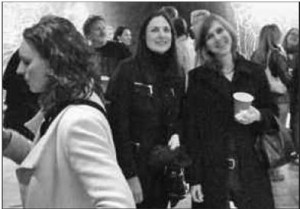 It’s always nice to enter a room full of people busy doing nothing — nothing, that is, but talking, laughing and enjoying themselves.
That’s a fairly common description of a good party. But it’s not always true of art openings, which too often can be stilted and stuffy affairs.
As we walked up to the corner of Gallagher and Caniff last Friday night, we could see that the scene at the newly-opened Public Pool was indeed looking like a party. Warm tracking lights from inside the space that once contained Design 99 — a unique gallery and consulting business run by married partners artist Mitch Cope and architect Gina Reichert — literally made the street glow a muted orange color. We saw steam beginning to fog up the large picture windows. Music could be heard as we got closer to the glass, and the sound of lively conversation grew louder as we opened the door and walked in.
I knew this was bound to be good, given the people involved in the gallery and its first exhibition, Take a Chance on Rock ‘n’ Roll LIVE. The opening was billed as an installation and dance party by cooperative member Tim Hailey, who created bigger than life-size murals of arena rock scenes over a 10-day period leading up to the opening.
Hailey had been a co-director of a non-profit gallery in New York and is a founding member of Public Pool. He got his Masters in Fine Arts from the University of New Orleans and has collaborated with Hamtramck artist-builder Steve Hughes on the Stupor zine series, which Hughes started in the early 1990s when he also went to school in New Orleans. Design 99 dedicated a show to Stupor in March 2009.
Other founding members include another former New Yorker, Toby Barlow, an executive creative director for J. Walter Thompson’s Team Detroit and the author of what some literary critics called one of the best novels of 2008, Sharp Teeth (now out in paperback, by the way).
Barlow also penned a New York Times piece that started the media feeding frenzy for Cope and Reichert’s “$100 House” in a neighborhood just north of Hamtramck. More marketing and advertising energy behind the gallery comes from members Jim Boyle and Mary Trybus (who once lived in a loft on Jos. Campau in the 1990s but now reside in Detroit’s West Village); Museum of Contemporary Art Detroit (MOCAD) board member Jesse Doan; and Ann Harrington-Hughes, also an acclaimed artist and art educator, who with her husband, the aforementioned Steve, have long made a home in Hamtramck and are raising their family here.
On top of all that star power, the cooperative members enlisted Berg Muirhead & Associate’s Peter Van Dyke, recently included in Crain’s Detroit Business “20 in their 20s” list of young movers and shakers, to build buzz for Public Pool in the press. It worked. All of it did, including programming music by iconic arena rock bands Boston, Triumph, Electric Light Orchestra, Journey and REO Speedwagon, played by a vinyl-spinning DJ at the party.

The room was packed with visual and sound artists, writers and publishers, musicians and radio DJs, hipster entrepreneurs and assorted gallery hoppers. All part of the non-stuffy relationship Hamtramck has enjoyed with grass roots art scenes and raw creative spaces over the last two decades.
Before we left, Hughes told me the next show is in the works for mid-May, details to come shortly.
“It’s a group show, with lots of great people. We’re excited about what we can do here. We’re really happy how this is turning out,” he shouted over the music.
So are we, my friend, so are we.