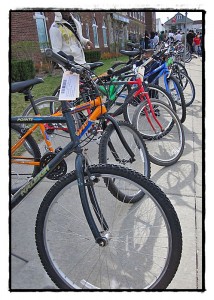 (Editor-at-Large Walter Wasacz writes a weekly column on life in Hamtramck.)
By Walter Wasacz
The timing couldn’t be better.
I needed a bicycle, had been thinking about where to get one since the tail end of winter. The Hamtramck Police auction, where seized, abandoned and recovered stuff of all sorts — electronics, cars, motorcycles, marine vehicles and plenty of bikes — could be had by the highest bidder was happening around the corner from my house. So convenience and opportunity drew me, and dozens of others, to the front steps of City Hall for the annual event last Saturday morning.
The smart ones get there early, an hour before the bidding starts at 11 a.m. (sharp, as the public notice says), to preview the goods. The smarter ones size up the items they want and the potential competitors there to battle over them. The smartest ones stay close to auctioneer Sgt. Wally Tripp and get ready to point and jab fingers into the air and yell out numbers that will get you what you want. I hung out with them — including Mikel Smith of Detroit Threads, an expert buyer, seller and trader — as much as possible.
Somebody got a Ford Expedition, not sure what year it was or its overall condition (though it looked clean and immediately drivable), for $6,000.
Bidding for a Sony Playstation went well over $100 before someone grabbed it. A flat screen television still in the box went for $300; other TVs went for under $50; DVD players for under $20; and a few VCRs for under $10.
There were prettier bikes than the one I had my eye on. But it looked big and sturdy, perfect for my size. It had some mud caked on, which I thought made it even more cool, but might turn some people off.
When it was time, I jumped headfirst into the bidding. “$1,” I said, finger in the air. A voice behind me yelled “$2,” then another up ahead said “$3.” I called out: “$4!” Then there was a pause before someone else upped the bid to $5. Without any hesitation I offered $6. I was willing to go higher, but was happy to hear Sgt. Tripp start the countdown: “going once, going twice, sold for $6!”
It was a nice catch, a great deal on a day full of great deals for a whole bunch of people. Walking my new grimy old bike through Zussman Park and back home made me feel like a kid again on the first day of spring.
It needed a good wash, a tune up and the tires had to be inflated. But I was already excited about taking a long ride under the warm April sun.