Street Life: The story of the world can often be found here at home 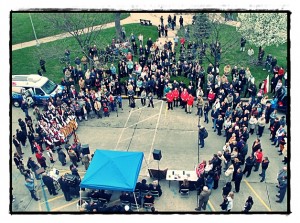 (Editor-at-Large Walter Wasacz writes a weekly column on life in Hamtramck. A version of this article first appeared in modeldmedia.com)

When I was at The Citizen newspaper, we launched a couple of occasional columns that dealt with some important issues of the day. One was called “Eye on Culture,” which focused on rapidly changing community demographics: ranging from the emergence of Hamtramck as a loose urban colony for young artists, musicians and funky academics to a destination for new immigrant groups from the Balkans and South Asia.

This was the 1990s, a time of transition for a city that previously had been largely summed up as a hub of Polish Americana. It still was, by the way, and still is over a decade later. The proof is in the outpouring of sympathy and respect after a plane crash in Russia earlier this month claimed the lives of Polish President Lech Kaczynski, his wife and over 90 leaders and members of the crew.

The vigil for the victims was not held in Macomb County, where a majority of Michigan’s population of Polish ancestry now reside, but in front of Hamtramck City Hall, on a street given the honorary title “Lech Walesa.” The street was re-named for the leader of the Solidarity trade union and political movement founded in the Gdansk Shipyard in 1980. Walesa, a world icon of resistance and freedom, became the first democratically-elected president of the post-communist Polish Republic in 1990.

Things have changed, true, but yet remain the same via these timeless connections. In Hamtramck, an assembly that mourns for people who perished in a crash half a world away has the weight of authenticity.

It is one of those rare places where the past, the present and the future intersect. Here, traditional religious institutions and social and political organizations like the Polish National Alliance, Piast Institute and Polish American Congress share the same turf with the Bosnian American Islamic Center, various Bangladeshi and Yemeni organized mosques, and Hindu and Zen Buddhist centers.

Diversity isn’t always pretty — witness recent scraps over human rights, or even a war of words over the definition of that term — but it does not stand in the way of expressions of sorrow by hundreds of people at the recent vigil, many with Polish flags in hand; or expressions of pride in seeing Conant given the honorific “Bangladesh Avenue” in the fall of 2008; nor passions that boil over when it comes to race and gender politics.

All tricky business, but all human stuff that needs to be out in the open for civil discussion. The social evolution of this community is an ongoing story I will return to often, simply as a habit of living here most of my life. And because it is universally fascinating and sets Hamtramck apart at the same time.

The other column we ran was called “Sidewalking,” dedicated to pedestrian issues of all sorts: observations and reports on walkability, bicyclist rules and safety, guidelines for motorists driving in densely-populated neighborhoods, digging up studies and examples of where good urbanism in practice elsewhere might work here.

The drift might also take in other concerns of neighborhood life, primarily in the direction of helping the community become greener and cleaner, more responsible for its trash, more self-aware of the power of its raw beauty.

In weeks to come, I’ll jump into some of these issues more directly, I promise, and you’ll get a chance to join me. I’ve set up an email account dedicated to only this column. You can engage me on either of the two threads we rekindled today — thoughts on cultural life, walkability and pedestrian safety, anything else to do with Street Life. Next up: a Twitter account that alerts followers around the world about community life in Hamtramck. I’ll let you know when that’s in play.
Send me messages at streetlifereview@gmail.com Include your name and home address in the correspondence; and an email address, of course. If you want it as a letter to the editor, I’ll pass it along. I don’t need to print your name in the column and will not include your address, unless you want me to. It might help if you have a specific concern about something in your neighborhood. No anonymous messages, please. Let’s keep it honest and real, mighty real.