Student enrollment drop is a financial blow to district 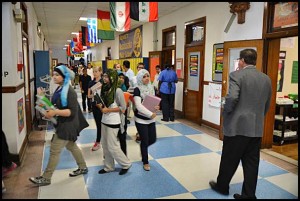 Public School officials were expecting an increase in student enrollment this year. Instead, there are fewer students than last year, meaning major budget cuts are coming.

Last year, it looked like there was going to be a significant increase in student enrollment for the Hamtramck Public School District.

So much so, administrators confidently budgeted an extra $700,000 coming in. But something happened between then and now.

According to the latest student head count, the one that the state uses to determine how much state financial aid to give to districts, there are actually 33 fewer kids than last year.

The district was expecting anywhere from 80 to 100 extra kids this year. Superintendent Tom Niczay said that after last year’s fall count there was an increase in students.

For some reason, those extra students didn’t enroll this year, he said.

That’s devastating news to a district that is already struggling to climb out of a budget deficit.

“There’s going to be some hard news, some tough decisions, and some people are going to get hurt,” said School Boardmember Alan Shulgon, referring to possible layoffs in the district.

Shulgon said there could be as many as 10-15 teachers laid off.

Niczay said he will draw up several budget cut options for the School Board to decide on at its next meeting in November.

Board President Titus Walters said it might come down to combining “several options.”

The public school district has been hit hard in recent years by the opening of several charter schools, both inside the city limits and in the neighborhoods bordering the city.

As of last year, a little over 1,900 Hamtramck students were attending those charter schools, or other schools of choice in Detroit and even in Warren.

Since 2005, the district has 345 fewer students, but there have also been ups and downs over those years. In 2009, the district recorded 223 more students than in the previous year.

No matter what, there does not appear to be a clear pattern to student enrollment from one year to the next.

The district has been waging an aggressive campaign to win over new students and retain those who are enrolled, with the slogan: “Start Here, Stay Here, Succeed Here!”