Students load up on health and physical fitness 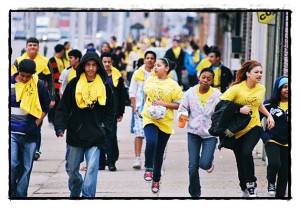 When you tell someone to “go take a hike,” well, that’s generally not considered a good thing.

But on Saturday morning, if you said that to the 200 or so Hamtramck students gathered at the High School Community Center, they’d most likely reply: OK! Let’s go!

And with their yellow T-shirts on, they did just that. It was part of the public school district’s “Hamtramck Health Hike.” But the event wasn’t just about getting some exercise. 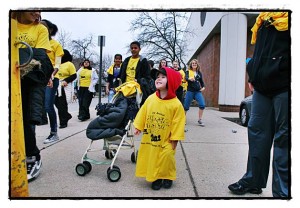 During the three-mile walk around town, the kids also learned some important anti-drug messages and factoids. After the hike, they also learned about healthy eating tips and then they watched a live healthy cooking demonstration.

For inspiration, School Boardmember Titus Walters talked to the kids before they left for the walk. Just about a year ago Walters weighed a very unhealthy – and possibly life-threatening – 500 pounds.

He decided to buckle down – literally – and followed some basic common sense dieting, and now weighs in a little over 300 pounds. Yes, he still has a way – or weigh? – to go.

Walters isn’t alone. There are some alarming statistics about the growing number of obese children. Kids today are much more sedentary because they spend so much time sitting and watching television, playing video games, or have their eyes glued to a computer screen.

And that’s why the district has made healthy eating and healthy habits a top priority. 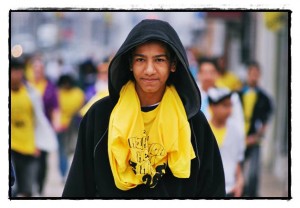