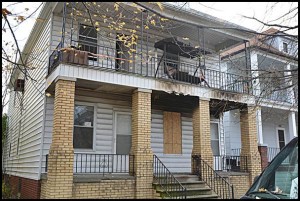 A woman died Sunday night in a house fire on Belmont St.

It’s not official, but it appears that a woman who fell asleep smoking in bed set a house on fire on Belmont St. Sunday night.

Fire Chief Paul Wilk said evidence so far is pointing in that direction for the cause of the fire. The woman died in the fire and three men were injured.

Two of the men are in critical condition and according to our sources may not survive.

As of Monday afternoon, investigators still didn’t know the identities of the victims.

Wilk said the fire broke out a little before 9:30 p.m. Wilk said thick smoke was coming out of the house when firefighters arrived on the scene.

The house, just east of Lumpkin St., has two rental units on the lower floor and one unit above.

Neighbors said they didn’t notice anything until fire trucks pulled up.

One neighbor said a man and woman and their dog lived in the unit where the fire started. The neighbor said the two drank a lot and that the man had struck several vehicles on the block one night a few months ago.

Wilk said a complication arose in fighting the fire initially. A bed blocked the front door from being opened.

He said doorways leading into and out of dwellings should never be blocked.

Wilk said investigators were looking whether the units had been up to housing codes.