Take a tour of Hamtramck 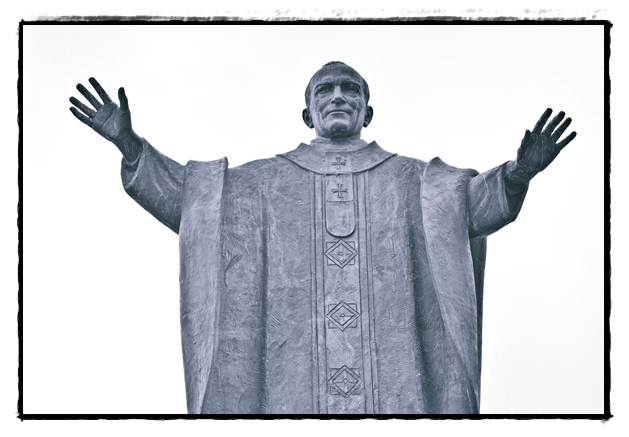 Well, there’s a whole lot of history here, and some of it might come as a surprise even to lifelong residents, says local Historian Greg Kowalski.

Kowalski, chairman of the Hamtramck Historical Commission, is gearing up once again to give a walking tour of our fair town.

It’s being done in conjunction with the Detroit Historical Society, and Kowalski says it’s about the “fourth or fifth” year it’s being run. Or rather, walked.

The Detroit Historical Society sets it up with Kowalski, and takes whatever payment they deem appropriate. This year, it’s $20 for Society members, $30 for their guests. The tour is one-time-only, next Saturday, August 25, and begins at 10 a.m. at St. Florian Church.

Barring the presence of an unforeseen event, such as a funeral, at the church, Kowalski likes to begin with a small tour of that building itself.

“I usually like to spend about the first 15 to 20 minutes there,” Kowalski said, “and then we come on down Florian St. to Jos. Campau, back up to Evaline, then over to City Hall.

“We continue back over on Yemans to Jos. Campau again, and finally back across on Florian to where we started.”
Kowalski said there’s literally a stop every 100 feet or so, where he can point out or discuss various history hot spots.

Asked to cite a couple of examples, he rattles off more than a couple.

“Right away, at Florian and Latham, I point out some of the architectural styles,” Kowalski went on. “One of the principle styles is the ‘national’ style, which are houses with upper and lower floors and flat fronts. That’s probably, in fact, the single most prevalent look.

“There are Craftsman style houses in that area, which were actually made from kits sold by Sears & Roebuck. These were often built next to railroad tracks,” he said.

“In fact, Hamtramck has many different types of house architecture represented. There’s Federalist, Tudor, you name it.

He goes on to reveal more of the city’s hidden secrets, such as where there were prohibition-era stills in operation. That, of course, naturally veers into a mention of one of the things the town has long been known for – its plentiful number of corner bars.

Next up is the shopping district, which, Kowalski says, was once extremely popular.

“It was second only to downtown Detroit in all of southeast Michigan,” he notes. He also points out the numerous lofts which have popped up along that strip lately.

Look down Evaline, he says, and you can still see the remains of an old barn visible. And boy, did a lot of those barns have a, er, dirty little secret.

“For a number of people, the family’s toilet was located out in the barn,” Kowalski laughs.

Go on the tour, and you’ll take in Zussman Park and St. Francis Hospital, the latter a historic designatee. Here, Kowalski says, he likes to work in a little pep talk about the city’s good side – its strengths, its diversity – and spin Hamtramck in a more positive light than it often, he admits, ends up in.

He points out the old Communist Party headquarters, and tells you (we won’t spoil it) which popular eatery along the tour was considered the “communist restaurant.”

Most times he’ll wrap things up on Jos. Campau (next to Jet’s Pizza) at Pope Park, the fencing for which, Kowalski notes, came from the Dodge Main plant originally. Here, he likes to give a last bit of the history of the town, and how Hamtramck has developed and changed over the decades.

“I generally end it there,” Kowalski says, “because often, people like to go off shopping on their own from that point. They can always find their way back to where we started at St. Florian, because you can see that tall steeple from just about anywhere in town.”

And while it may be true that, by sticking to the more-central, arguably “safer” part of town, away from the fringes near the Detroit and Highland Park borders, one doesn’t necessarily get “the whole story,” the tour is still packed with information and tidbits that Greg Kowalski, who had authored a handful of books on Hamtramck, has gleaned from his long-standing interest in his, and our, favorite little 2.1 square mile city.

Heck, maybe someday you’ll end up doing a bit of educating, for some other folks, on the joys of old Hamtown yourself.
Call the Detroit Historical Society at (313) 833-1805 to register, or for more information. The tour isn’t really promoted, other than by word of mouth, so if you go and you enjoy it, let others know for next time!

One Response to Take a tour of Hamtramck