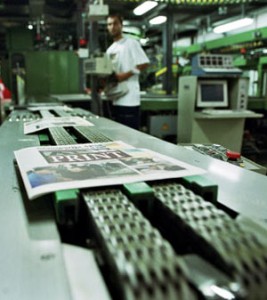 Ever wonder about the story behind the story in Hamtramck? It’s not often we get a chance to pull the curtain back and let our readers in on some of the behind-the-scenes of events and stories we have covered.

By Charles Sercombe
Back in the 1980s, covering the police beat was pretty laid back, compared to what we go through these days to get information from the department.

I don’t mean that in a critical way, but way back when, things were a lot looser. I could regularly get the OK from the front desk sergeant at the old police station, which used to be a dormitory for nuns, to go upstairs to talk with the detectives.

One of my favorite stops was at the office of Detective Don Milewski, who is now retired. He had a great sense of humor, which comes in handy when you regularly deal with the gritty side of life.

One day I walked into his office and went to sit down as usual but was hurriedly told:

Don said that a little too late because I had already made contact.

And why not sit down?

Well, there splayed out on the chair was a bullet ridden pair of blue jeans. With wet blood.
Don cackled like a maniac. I had the look of being pranked.

That’s one heck of a way to start the day.

The story, from what I remember all these years later, was that a drug dealer was shot to death while driving his car, a Mercedes, down I-75. It just so happened the portion of I-75 that the shooting took place was in Hamtramck.

The poor guy died in a hail of bullets. Drug-related murders were common in the 1980s. And from what I remember, no one was ever arrested in this case. Such a waste of life.

Having covered dozens and dozens of these deaths, I had become detached from the human part of these victims. Each death became just another number. This may or may not explain what happened next.

After Don’s mad laughing quieted down, I started thinking. Huh, the guy’s dead, he won’t be needing his Mercedes. And the car was still in good shape, except for the bullet holes. It had gently rolled to a stop on the highway. At the time, I was driving a piece of crap (and I continue to drive a piece of crap). To my thinking, driving around in a Mercedes that was riddled with bullet holes had a peculiar Detroit street cred.

“Is the Mercedes going to be for sale?” I asked Don.

I can’t remember why Don said that, and I didn’t pursue the subject. Just as well. I’m sure it had plenty of bad ju-ju.

At least I got a “good” story that day. And for a moment, I had imagined myself tooling around town in a Mercedes! But before I could type up the story, I first had to stop home for a change of clothes. Remember? The wet blood?