Ever wonder about the story behind the story in Hamtramck? It’s not often we get a chance to pull the curtain back and let our readers in on some of the behind-the-scenes of events and stories we have covered.

One of the joys of working at a newspaper is looking through the photo archives.

Although The Review has been here for only two years, I had the pleasure of working at the former Citizen newspaper for over 20 years. We had thousands of photos taken over The Citizen’s 75 years of existence.

Unfortunately, a former editor, who will remain unnamed, had one of those moments that many of experience. A moment of profound bad judgment, of “what was I thinking?”

I was new at the paper at the time, so when this unnamed editor had a fit of house cleaning and decided to throw out our “old” photos, I remained silent but in a state of “this is so wrong but what can I do?”

I managed to grab a few photos from the garbage bags. To this day, I’m still stunned I witnessed the loss of a treasure. Gone in one afternoon was a city’s history in photos.

But, go ahead and cry all you want in your beer, or my beer if you ever belly up next to me at one of our local pubs. What’s done is done.

Hundreds of other photos were handed over to the city’s Historical Commission for safekeeping when The Citizen moved to a smaller office.

So … with this weird introduction out of the way, here are some of the photos I saved. I took them for no particular reason other than they spoke to me or maybe I found them humorous.

Or maybe I just grabbed what I could without causing a row at work.

Let’s go straight to the humorous. The photo labeled “1” is from Channel 7 Rita Bell’s “Prize Movie” program that ran during the 1960s and ‘70s.

If you are a longtime Detroiter – and by that I mean anyone who is at least 50 years old or so – you will remember Rita Bell’s weekday movie feature, which featured local Detroiters playing some sort of game of chance in between the showing of a feature movie.

Here is a photo of a grandmotherly woman, identified on the back of the photo as Mrs. Veronesi, who apparently lived in Hamtramck or in the nearby Detroit neighborhoods.

I have no idea if her family is still around, but if you are related, I would love to hear the story behind this.

And as for why I find this humorous? I’m not sure. She sure is a sweet looking grandmother kind of woman who I would enjoy knowing and having as a neighbor.

Maybe I find it “funny” because of the juxtaposition of the prim, modern look (at least for those days) of Rita Bell and the Old World grandmother in question.
Whatever, I just want to hug the old gal. She reminds of a place, a time and a people who are long gone and who I miss dearly. 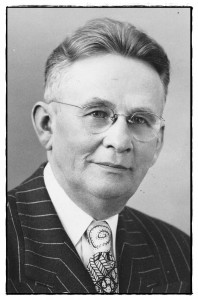 Photos 2, 3 and 4 are fascinating portraits of people of their time. The brunette gal is identified only by her last name Motyko. The other gal’s last name is Mudryj. Judging by the hairdos of the gals, it looks like the 1960s. The guy’s name on the back of the photo is partly erased, but his first name is Adam. In handwriting the year says it’s 1948. I like his tie and his whole get-up. Pretty stylish. 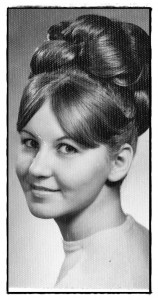 The women’s hair, though, is what gets me. I mean, I like it a lot. They remind me of my sisters and their various hair wars. There’s the up-do and there’s the super straight.

It reminds me of my older sister Jenn back in the early 1960s, when The Beatles were all the rage. I used to watch with amazement as she ironed her hair as straight as can be even though there was not even a hint of a curl or a wave. 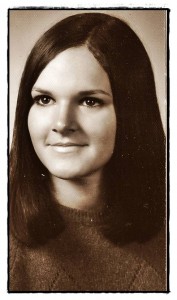 But those were the times.

Number 5 is also a photo of its time. The only info I have on this is she was Sister “Perpetua.”
I’m not Catholic, and I’ll be upfront: nuns scare the crap out of me. It’s a combination of hearing tales of woe from my Catholic buddies about mean nuns, and the fact that their long black dress and hair-covering garment, called a habit, spook me.

I have looked closely at this photo, and I can’t tell if I see a mean — or stern? — nun or a kindly one. Maybe there’s a combination of the two.

And for the record, I don’t mean to cast all nuns as mean. I have gotten to know a number of them in my years of covering the news of this town, and I can honestly say there are many who are as kind as kind can be and have sacrificed a huge part of their lives to make us a better people and this world a better place to live. 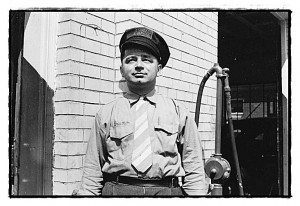 Believe it or not, kids – and by kids, again I mean anyone under the age 50 – there was a time when we had guys dress in a work uniform and not only pump your gas, but also check your oil and clean your windshield. For no extra charge.

This portrait is dated June 9, 1944, which was a year before World War II finally ended. The fella almost looks like he’s a character from the old “Bowery Boys” movie series. 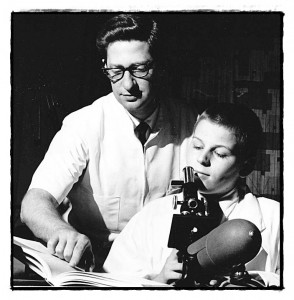 And talk of a movie-like look, check out photo 7. That’s a science teacher for sure and that’s a student also for sure. But what was this photo about? No matter, it looks something out of a theatrical production. Check out the dramatic lighting and angle and perfect poses.

That’s one thing I like about old time newspaper photos, some were so stagey and dramatic looking. 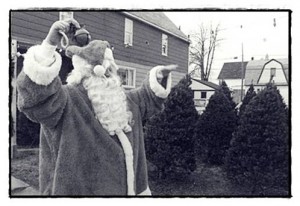 From a Sister to a Santa. I took photo 8 in the 1990s. It illustrates a certain funky humor this town sometimes displays. Here’s a guy dressed in a Santa outfit hustling Christmas trees in an empty lot, which is not to say that alone is funny.

What is? I’m not sure but maybe it has something to do with an unspoken attitude he displays. You can imagine him – or at least I can — smoking a cigarette and taking a few swigs of whiskey or vodka here and there in between his street hustle.

Not that there’s anything wrong with that. 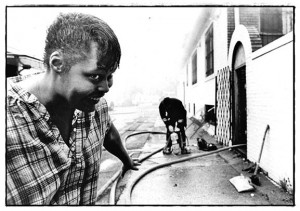 And now maybe the most mysterious of all the photos, number 9.

I’ve lost count how many fires I have covered. This one wasn’t particularly serious, which is easy for me to say. The woman in this photo lived in an apartment behind a party story that caught on fire.

The cause of the fire, I don’t remember. Her belongings were mostly OK, but obviously heavily smoke-damaged.

I was taking this photo of a firefighter getting some gear ready when the fire victim zoomed into the frame out of nowhere. One click in an instant of a second, and there she is, caught forever by the magic of photography.

I have looked long at this photo and find her expression strangely disturbing.
Those eyes. That seemingly goofy grin.

I think she was probably fragile even before this fire.

Her look haunts me. Her presence that moment even more so. Here and then gone.

What happened to her?

I can tell you, many if not most of the people I have met who have survived a fire were seriously traumatized. To be, in one instant, homeless and have your possessions wiped out is a primal fear. I guess that goes without saying, but still, to experience their raw emotion close-up … it gnaws at you.

My heart goes out to her — whoever she is — every time I revisit this photo, and I hope she is in a much better place now.

One Response to Talk Back …