Teachers a long way from a contract 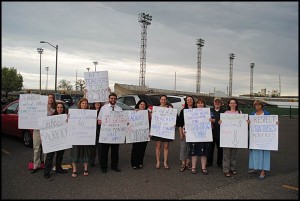 Hamtramck Public School teachers have held protests during the past several months in frustration as contract negotiations drag on.

You can bet there is one thing Hamtramck’s public school teachers would like to get as a present this holiday season: A labor contract.

But by the way things have been going, that doesn’t seem likely any time soon. The teachers and the school district have been negotiating a new contract since last February. Their contract officially expired in August, which now means teachers can opt out of being part of their union since the state’s “Right to Work” law went into effect.

Having teachers defect from the union is probably the least of their concerns.

“We’re at a stalemate,” conceded union president Michelle Cook when asked how contract negotiations are going.

One of the key sticking points is the matter of what order employees can be laid off and recalled back to work. The union insists it should have a say in that order.

“It’s about management rights,” said Superintendent Tom Niczay, who declined to go into detail about negotiations.

Cook said “that’s a pretty harsh interpretation” of what the state law allows.

What’s working against both sides is the fact that the district now faces a $3.7 million budget deficit.

Teachers have taken cuts to their salaries and benefits, and even Niczay has taken a 22 percent reduction in pay.

It’s now at the point where the district is looking at laying off its custodians, secretaries, bus drivers and security staff and privatizing those jobs to save a few bucks.

But there is no guarantee that the bids the district is seeking for those jobs will actually result in a savings. Custodians have already taken a 25 percent pay cut.

The district has been hit with a triple-whammy in recent years. First, Gov. Snyder and his Republican colleagues in the state legislature slashed all district budgets. Then, Hamtramck school officials expected an uptick in student enrollment only to fall far short of that prediction.

Some teachers have called that projection “reckless.”

Niczay bristled at that accusation, saying that the administration closely tracked the student enrollment and felt they had solid numbers.

“We didn’t pull that number out of thin air,” he said at this month’s school board meeting.

The third hit against the public school district is the ongoing growth of charter schools. Last year yet another charter school opened in the former St. Lad’s school on Caniff.

That means there are eight competing charter schools in the immediate area – all of which are draining more students away from the public school district.

Niczay said the combined effect has been devastating. Each student is worth about $6,000 in state financial aid.