Teachers take a hit in the wallet 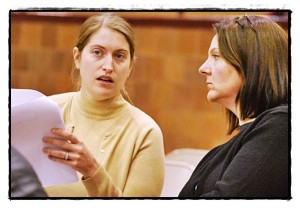 Hamtramck Public School teachers have agreed to a salary cut and to pay 20 percent of their health care costs.

Their new contract was ratified Tuesday by a 2-1 margin.

Teachers will also be hit with a pay freeze and then a 5 percent salary cut later this year, as well as another 5 percent cut in 2012.

“It’s not an easy thing to do,” Niczay said in reference to the concessions. “Unfortunately, it’s the situation we’re in.”

The president of the teachers’ union, Michelle Cook, said teachers realize the district is in a financial jam.

Brad Neff, a media specialist at Kosciuszko Middle School, said the concessions had to be made in order to avoid a state-appointed emergency financial manager taking over the district.

“No one likes concessions, but it might be a far better thing to accept one level of concessions now than to later accept far greater concessions at the hands of a Lansing-appointed emergency financial manager,” Neff said.

Cook added that the threat of a financial manager taking over the district is an “attack on collective bargaining rights.”

Niczay said that despite the concessions, he cannot guarantee that there won’t be layoffs next fall. He said the question of layoffs depends on how many students enroll next fall.

Last fall, student enrollment fell by over 150 students. Hamtramck’s public schools have seen a steep drop in enrollment in recent years because of competition from local charter schools. That drop in students has resulted in the loss of millions of dollars in state aid.

The competition for students is only going to get tougher. Hanley International Academy is building a new school on Denton St. that will house pre-kindergarten students through 8th grade.

All of the state’s public school districts have been hit with funding cuts. Gov. Snyder and lawmakers have been going back and forth on how deep the cuts should be for the past few months.

The final version appears to be that funding per student will decrease by $400, with a chance for the district to earn $200 back per student if it succeeds in getting concessions.

Niczay said the district is facing a budget reduction of $871,500. Asked if the district can survive such a drastic decrease in state funding, Niczay gave a terse reply: “We’re going to try.”

The MEA says it’s an attempt to bust the teachers’ union and privatize services.

On Tuesday, the MEA called for teachers to hold protests at their schools. Hamtramck teachers did not stage a protest, but former union president Bo Karpinsky said he wore “red for ed.”

One Response to Teachers take a hit in the wallet