Teens rap and write about their community 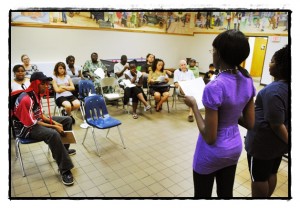 Last week it was the southside’s time to shine.

On Thursday (July 29), a month-long program for Hamtramck youth at People’s Community Services culminated with a special presentation titled “My Community, My Voice.” The event featured kids of various ages showcasing their talents involving everything from painting and writing to cooking and rapping.

Over the last month, the youth have been attending a program put on by University of Michigan Masters of Social Work interns Whitney Lacefield and Cheri Pace. During the program, Lacefield and Pace taught the children how to advocate for themselves things they would like to see happen.

The result of their self-advocacy was on full display during Thursday’s presentation. Collages of photos depicting the major issues affecting youth were on exhibit, as well as recipe books, pictures of adolescents gardening, and various other types of artistic expression.

During the event, a video was shown featuring kids in the program making suggestions about the city and how to improve it. Also during the video, the very talented Diamond Hands spits a freestyle rap years beyond the average 10-year-old’s ability.

She wasn’t the only one with poetic abilities, though. Reading a previously written rhyme, Demetrius Timberlake also showed what he could do with a pen and paper, wowing the crowd with his rap.

Overall, the event was a resounding success. Lacefield called the night “magical” and credited the youth with not only putting it together, but for truly digging deep with their analysis of their community.

“They spoke with the type of confidence that some folks twice their age wish they had,” she said. “All in all, it was an amazing evening and event.”

One Response to Teens rap and write about their community