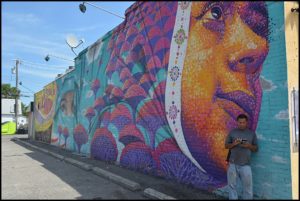 The city’s beloved Yemeni mural may not be obstructed after all. A tentative agreement has been reached to save the mural.

By Charles Sercombe
There is a good chance that the Yemeni mural on the southend will be saved.
In a press release issued by Bill Meyer, of OneHamtramck, a tentative agreement was reached with the owner of the lot next to the mural.
The owner of the lot, Ali Alzubairi, was planning to build a two-story building in the lot that would have blocked the view of the mural, which is located at Jos. Campau and Goodson.
OneHamtramck paid about $20,000 to have the mural painted, but the group did not secure the lot next to it.
Details of the agreement were not released, but will be once a memorandum of understanding is signed, which is expected to happen later this month.
Alzubairi was asking for $80,000 for the lot, and a complex land swap involving city-owned lots to allow him relocate his building.
In his press release, Meyer confirmed the deal does involve Alzubairi going forward with his project in “adjoining lots.”
Meyer said negotiations, held on Aug. 29 in city hall, were conducted by a number of folks, including Hamtramck City Manager Kathy Angerer, Sam Alasri from the Yemeni American Political Action Committee (YAPAC) and law professor and professional mediator Khaled Beydoun.
The meeting lasted several hours.
Another detail did emerge in the press release, which said the lot next to the mural will be turned into a park.
The mural depicts people and scenes from Yemen, and it is considered by many to be one of the best murals in the city.
In his press release, Meyer had this to say about the mural and the tentative deal:
“The Yemen mural project was created to draw attention to the marginalized Arab community in the south side of Hamtramck, and also to help develop its local business community, so the agreement that was reached satisfies this win-win goal.”