Thanks to dough from Domino’s pizza company, potholes get filled 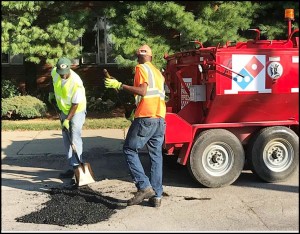 A Domino’s pothole repair crew hit the streets this week. No, that’s not pizza dough they are using to fill the potholes.

By Alan Madlane
Hamtramck, get ready to stop being so cheesed off about local potholes.
You likely won’t need to avoid that void that used to rattle your adenoids anymore. That’s because Domino’s is tossing a grant party, and you’re invited!
Tying it into their long-standing promise of swift delivery service, the pizza maker is taking on everybody’s least favorite nemesis, the pothole. And thanks to several apparently persistent local nominators, Hamtramck has indeed been selected to receive one of the company’s “Paving for Pizza” grants.
Does this mean Hamtown is about to become Ham-and-Pineapple-town?
Well, maybe not, but the Domino’s pothole repair truck has already been spotted, accompanied by workers with shovels, making good on their promise. And it looked like they were throwing “everything on it.”
Founded in 1960 in Ypsilanti by future Detroit Tigers owner Tom Monaghan and his brother James, the pizza company, first known as DomiNick’s, and since sold in the late 90s to Bain Capital, boasts 15,000-plus stores in 85 separate global markets. Slightly more than half its 2017 sales of $12.2 billion came from overseas markets. Independent franchise owners account for 97% of the stores.
The “Paving for Pizza” project, already completed in four U. S. cities and currently toiling in 11 more, of which Hamtramck is one, is part of a larger strategy to eventually hit one or more cities in each of the 50 states. You can track progress through their pavingforpizza.com website.
Domino’s said they had received some 137,000 individual nominations for cities in 15,275 different U. S. zip codes, meaning Hamtramck had to beat out some plentiful competition for the grant.
Ironically, no Domino’s exists within the city limits; to enjoy their pizza and other items, you could contact their stores on Woodward near Wayne State, or on E. 8 Mile near I-75.
So have a deep dish about this with a neighbor, stay out of the heat (it’s like an oven out there), and watch for, and wave to, your cheerful pothole fillers from Domino’s.
Another weird slice of local history.