The Day We Almost Lost Hamtramck 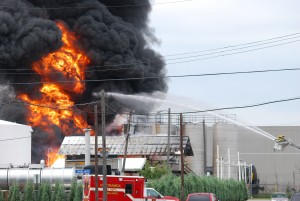 A fuel tank erupted into flames at Sterling Oil on Grand Haven at about 11:30 a.m., which could have potentially spread to a dozen other fuel tanks at the site.

Had the fire spread, officials said there could have been an explosion reaching several blocks away, possibly all the way to Jos. Campau.

About 800 people were evacuated from the Col. Hamtramck public housing complex as well as dozens of other residents living in houses near the Sterling Oil site.

For years residents and city officials feared that one day the fuel tanks would explode into flames.

Hamtramck firefighters were aided by Detroit and Highland Park firefighters and were able to contain the blaze. It was an amazing display of skill and bravery. At any time the tanks could have exploded, likely killing the firefighters at the scene.

The cause of the fire was not immediately known.

At the time we went to press, at 2:30 p.m., there was renewed fear that the fire, which had been knocked down but still stubbornly flickered, might spread to fuel lines.

“We might have a whole other issue,” said Hamtramck Sgt. Wally Tripp.

According to the state DEQ, there is no record of violations at the site.

The website for Sterling Oil & Chemical Co. says the site has the capacity to store five million gallons of various fuels and chemicals in a total of 45 above ground tanks.

Residents in the Col. Hamtramck apartments were bussed to the Senior Plaza where they were provided shelter, food and water.

There were no reported injuries.

Residents in the area said they have long feared the tanks could explode.

“When we were kids we always said if it caught on fire, what would we do?” said Dejuan Slappey, 44, who grew up in the neighborhood near the plant.

Looking on across the I-75 freeway, Toni Matihis was worried about her house on the service drive on the other side of the freeway.

“They should have a plan,” she said.

There is in fact a plan, one created by Wayne County. The plan is essentially to evacuate the neighborhood.

The Hamtramck Housing Commission said its plan in a case like this is to bus residents to the Senior Plaza, which is what happened.

In over 20 years of reporting on fires in Hamtramck, this reporter has never experienced a fire of such magnitude and horrifying implications.

When this reporter first arrived on the scene, just seconds after Hamtramck firefighters arrived, a son of the owner of Sterling Oil demanded the reporter to stop taking photos of the fire.

This reporter refused saying, “this is a major news event.”

And indeed, the media swarmed to the scene. Television news stations interrupted their regular programming to report the fire.

Smoke from the fire towered hundreds of feet into the air and could be seen as far away as downtown Detroit.

Amtrak suspended rail service from downtown to Pontiac because its rails ran alongside the chemical plant.

Although people were told to move to the other side of I-75, many refused orders to move back further, sometimes cursing back at volunteers doing traffic and crowd control.

For some, watching the fire became a festive event. Several onlookers held cans of beer and bottles of liquor.

Few seemed to realize that had the fire spread, an explosion would have likely injured or killed them. The heat of the fire could be felt several blocks away.

Firefighters bravely fought the blaze from 50 to 100 feet away, exposing themselves to possible death at any moment.

By 5 p.m., firefighters had extinguished the blaze.