The enduring spirit of Christmas, even in troubled times 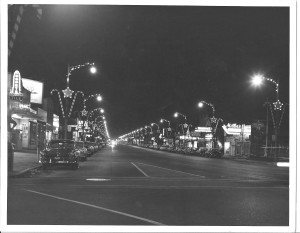 By Greg Kowalski
These are troubled time.
The whole world seems to be in endless turmoil, the United States is under the threat of foreign attackers and the future is uncertain.
Yet there is hope, although tempered with unease.
That was the prevailing attitude of Hamtramck in December 1943, in the depths of World War II. It was a joyous season, but it was a muted joy. We were winning the war, sort of. But Germany and Japan still had a lot of fight left. Europe was thoroughly under the control of the Nazis and those dreaded telegrams were still arriving at a regular rate informing that a loved one had been lost.
For some the Star of Bethlehem was replaced by the Gold Star hung in the window, signifying that someone would never be coming home for Christmas again.
“Some of the more realistic effects of the gigantic war will be felt when Hamtramck celebrates its 1943 Christmas,” The Citizen newspaper noted on its front page on Dec. 23, 1943.
“Some, of course, have already been noted. The shortage of consumer goods, usually plentiful, the rationing of food and other items, makes for a less demonstrative Yule spirit. And, too, the curtailment of liquor supplies doesn’t add to a noisier celebration.
“However, balancing the ledger is the knowledge that Hamtramck, as well as the rest of the nation, has gone through another year free of the sounds of battle.”
The Citizen tellingly noted that there would be many empty chairs at the Christmas dinner table that year. Some 5,486 Hamtramckans were in the service then, and most would not be coming home on furlough.
All these factors overshadowed the spirit of the season.
Nevertheless, life went on. City Hall closed at noon on Christmas Eve, churches braced to welcome crowds at Midnight Mass and harried wives, moms and grandmothers scrambled to prepare Christmas Eve and Christmas Day dinners in the constraints of rationing.
But there didn’t seem to be any rationing on pierogi, dried mushrooms and fried fish, all which were available at Dad’s Delicatessen at Jos. Campau and Caniff.  And the meat markets, including Kowalski’s, were producing kielbasa at a steady pace.
At Tau Beta on Hanley Street, an amateur acting troupe put on a free performance of Charles Dickens’ “A Christmas Carol.” Over at Kosciuszko School, Santa made a special appearance. And 40 kids over at the recently built Col. Hamtramck Homes put on a holiday play and set up a Nativity scene.
Still, the presence of the war was felt everywhere. Detroit Edison urged people to curtail their holiday cooking as much as possible to conserve fuel that was needed for the war effort. And if you were lucky enough to have a telephone, Michigan Bell Telephone asked you to “Help keep war-crowded circuits clear on Dec. 24, 25 and 26. Please use long distance only if it is vital. War needs the wires – even on holidays.”
Images of soldiers decorated store ads in the paper, and Fromm’s store listed its own Honor Roll of overseas soldiers: Lt. Edward J. Malinowski, Sgt. Julius Kucab, Pvt. Stanley T. Czarnik and A-S George Kucab.
Of all places, White House Cleaners may have captured the spirit better than anyone else.
“The Best to You!” It stated in its small ad.
“The 1943 Christmas Season cannot be quite as gay as those in previous years — for there will be empty chairs at the Yule Dinner Table.
“The True Christmas Spirit will never be missing, though. For we Americans know how to Live and how to Fight.
“It is the sincere wish of the White House Cleaners and Dryers that Yanks — those on the home front and those on the battle front — put aside their cares and enjoy a real Merry Christmas.”
And it was a merry Christmas, despite being troubled times.
Remember that spirit this year.

2 Responses to The enduring spirit of Christmas, even in troubled times