The final bell is about to ring for Dickinson West 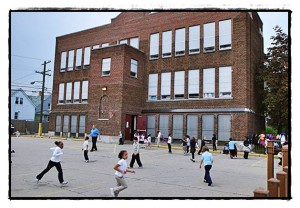 Per a memo released by Public School Superintendent Tom Niczay this past Monday, the Archdiocese of Detroit has been formally notified of the district’s intention to relocate Dickinson West back into one of their own buildings, in this case Kosciuszko Middle School on Burger St.

Also per the memo, the district gives notice of a meeting for parents this coming Wednesday, May 18, where there will be a power point presentation given on how things will work in the new arrangement. A Q&A session will immediately follow this presentation.

The district also plans a parade on June 9, a symbolic walk over from the old St. Lad’s Caniff St. location to Kosciuszko. The older kids in grades fourth through sixth will make the trek first, starting at about 9 a.m., with the first through third grades following at around noon.

Parents are currently being surveyed — for a second time — on their intentions of keeping their children in the district. The initial survey, conducted a short while back, seemed to indicate that most parents were at least willing to give the new arrangement a try.

Niczay said that about “85 to 90 percent” of parents indicated, on the first survey, that they would be staying. The remainder, he said, were for example renters, who weren’t sure they’d be staying in the area, or in a few cases parents simply looking for “greener pastures.”

“We can’t blame a parent for trying to find the best situation for their kids,” Niczay admitted.

Perhaps a few who were intent on leaving had some trepidation that their children were being asked to share space with older, more mature children?

Niczay downplayed that, saying it was really just more about numbers – some people are always leaving between school years. Hamtramck deals with that more than other districts, since it has a higher percentage of renters.

The move out of St. Lad’s school comes as the district faces a $4 million budget deficit.

The students in grades first through fourth will be moved into 10 portable classrooms. Niczay said they are outfitted with air conditioning, are newly carpeted and each have their own private toilets.

Grades fifth and sixth would be incorporated into classrooms in the main building, available due to the generally declining enrollment. As the numerous charter schools, and the availability of other nearby districts such as Warren’s, pick up more of the local kids, you can be sure more consolidations are likely to follow.

For next year, at least, Kosciuszko will be brimming with kids.