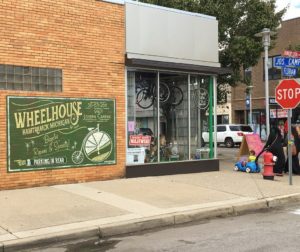 Wheelhouse Detroit/Hamtramck is one of three Jos. Campau businesses closing.

By Charles Sercombe
Back in 2016, the folks over at Wheelhouse Detroit had high hopes for expanding their bike shop into Hamtramck.
“We just wanted to expand into a neighborhood that needed a bike shop,” Wheelhouse employee Tatiana Pastor said at the time. “We’re proud to be in Hamtramck. We love Hamtramck, and we’re just really excited to be there.”
Apparently, Hamtramck couldn’t show enough love back. The Hamtramck location, on Jos. Campau, will close on Dec. 23.
The owner of the business, Kelly Kavanaugh, was terse in her explanation of why she is closing the operation down.
“It just never took off quite as we’d hoped and, after three years of trying to make it work, we have decided to close the doors and focus our energies on the Detroit shop,” Kavanaugh said in an email.
If you haven’t stopped by the store yet, and are in need of bike gear, now is the time to do it. There is a storewide sale of 25 percent off.
On its Facebook page announcing the store closing, several residents responded, mostly in shock.
“This is very sad news for you and sadder news for Hamtramck. I’ll be bringing my bikes down to the other store but I’ll miss you guys in Hamtramck,” said Catherine J. Roach.
This isn’t the only store closing happening on Hamtramck’s main commercial district.
Fresh Foods has also announced it is closing, although the actual closing date was not immediately known.
And rounding out the late-year business closings, Mom and Pop Toy store on Jos. Campau will be closing sometime this January.
“Our vision and dreams have come to pass,” said Sharon “Mom” Howell about her decision to end her business run.
As for her future, she said: “We have a lot of things in the fire.”
The closings have raised questions about the city’s ability to help in spurring economic development.
Former city councilmember Robert Zwolak blames a lack of support from city hall.
“We have done nothing in developing commercial development,” Zwolak said.
He also had harsh words for the city’s Downtown Development Authority for not spending money on promoting the Jos. Campau business district.
“I can’t comprehend why they don’t do more promotion,” he said.
He said the city has lacked a full-time economic development department director for the last few years.
“Even if they do hire one, it will take them a full year to get up to speed,” Zwolak said.
Dec. 20, 2019

One Response to The holiday season isn’t so joyful for three Jos. Campau businesses