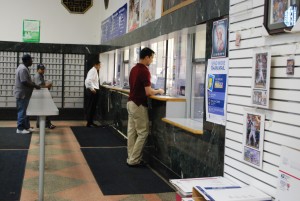 A lot of noise was made in Hamtramck to save the post office on Caniff. And for good reason, not only does the city need access to a post office, the post office is a great link to the city’s history.

The post office on Caniff was completed in May 1936, in the midst of the Great Depression. But postal service had long been established in Hamtramck by then.

The first Hamtramck post office, or at least what served as a post office, opened in Hamtramck before 1900. People could pick up their mail from the Kraft Restaurant and Grocery store on Jos. Campau, just north of where the viaduct is today.

The store was owned by Christopher Kraft, and letters sent from the site were stamped “Kraft, Mich.”

That building later became Munchinger’s saloon, the political center of the community when it was primarily occupied by German farmers.

On Dec. 5, 1901, the village council adopted a resolution officially changing the postal district to Hamtramck. Munchinger’s saloon later burned and was replaced with a two-story brick building, first consisting of two stores and two flats above, then expanded with another two stores and flats above the following year. Those conjoined buildings are still standing.

This was a time when Hamtramck was still largely rural. Emil DeProsse, who was postal superintendent from 1913 to 1933, recalled in an interview done in 1940, “At that time Detroit had a population of about 490,000, and north of Caniff Avenue in Hamtramck was all prairie. What houses there were, were spread out, and Michigan was grouped along the Michigan Central Railroad.”

On Feb. 15, 1915, the Hamtramck Rural District was taken over by the Detroit Post Office and made an independent station at what is now 8578 Jos. Campau, at the corner of Dan Street.

In 1923 the building was destroyed by fire, and postal services were moved to the Milwaukee Station on Grand Boulevard. But just a month later, space was rented in the original Liberty State Bank building, which is now where the Polish Art Center is located.

Later that year, space was rented in the Bank of Hamtramck Building (later Bank of Commerce) at the northeast corner of Mitchell and Caniff, right across the street from the present location of the post office.

In 1929, the city petitioned the Federal government to build a new post office in Hamtramck, which by then had grown to 56,000 people.

“It has taken years of hard work to make this new post office possible, but it has been worth it,” Sadowski said.

About 500 people attended the groundbreaking.

One Response to The Long Route Of The Hamtramck Post Office