The lore of Hamtramck … 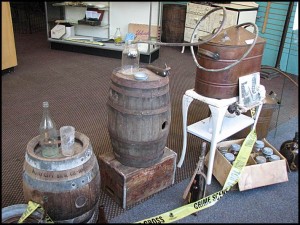 A homemade distillery is on exhibit at the new Hamtramck Historical Museum. During Prohibition Hamtramck was famous for ignoring the national ban on alcohol sales and consumption.

The Hamtramck Historical Museum officially opened on Labor Day weekend, and to date hundreds of people have visited the site.

What they have seen so far is just the beginning.  Only about a third of the first floor of the building, at 9525 Jos. Campau, between Poland and Norwalk streets, is being used for displaying items.  But already two new display cabinets have been added to the space in the last two weeks.

Then the museum will fully live up to its mission, which is not only to place items on display but to serve as a community center where a wide variety of programs will be offered that reflect the history and rich diversity and culture of Hamtramck.

The museum will be launching outreach programs to the various ethnic groups in the town to ensure that they understand the museum belongs to all Hamtramckans, regardless of which country they come from and how long they have lived here.

For now, everyone can visit and see the fascinating items on display. Probably the most popular piece is the authentic Prohibition Era still in the front window. This was recovered from a building in Hamtramck. It’s unusual in its completeness. Not only does it have the cooking pot where the mash was boiled, it even has the original small stove that the cooker sat on. The bottles and jars with the still were all from the same setup.

During Prohibition — roughly from 1919 to 1933 — Hamtramck was a wide open town where liquor laws were flaunted.  Corruption was so intense that in 1923 the Michigan State Police took over law enforcement operations. They raided houses and businesses where illegal liquor was being produced at a furious rate.  Dozens of places were raided — to no avail. The drinks flowed with abandon.

Illegal liquor was produced in the city long after Prohibition ended. Even in the early 1960s, police found homemade stills operating in garages, basements and attics. It’s all part of the lore of Hamtramck.

Find out more by visiting the Hamtramck Historical Museum.  Hours are 11 a.m. to 4 p.m. Saturday and Sunday.

(Greg Kowalski is the Chairman of the Hamtramck Historical Commission.)