The Lore of Hamtramck: Raising a glass to Prohibition 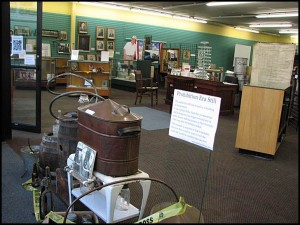 This genuine illegal still was found in a building in Hamtramck. It’s on display at the new Hamtramck historical Museum.

Last week marked the 80th anniversary of the repeal of Prohibition. It was a noble, if misguided, attempt to cure the nation of the ills of alcohol. It also was a complete disaster. Prohibition was universally ignored and spurred the success of gangsters like Al Capone and the Purple Gang.

Nowhere was the folly of Prohibition more evident than Hamtramck.  Consider that in 1920, when Prohibition was enacted nationally, Hamtramck had a population of about 48,000 people, the overwhelming majority of them being Polish immigrants.

Poles and strong drink have a long tradition of togetherness. So imagine a new immigrant arriving in Hamtramck and suddenly being told he can never have a glass of beer again. Now imagine his response.

Yep. You know where you can put Prohibition.  So almost immediately Hamtramck became a center of the illegal liquor trade. Seemingly everybody was brewing beer in the basement or bottling gin literally in the bathtub. Speakeasies were everywhere, barely concealed from the prying eyes of the police.  And those eyes could easily be diverted by a few dollars.

Hamtramck developed a national reputation as a wide open town where even Detroit politicians and gangsters would come for a quiet drink out of the spotlight.

The situation was so bad that by 1923 the Michigan State Police came into Hamtramck to take over law enforcement. (This is also historically significant as the first instance of the now time-honored Hamtramck tradition of having the state step in and take over the city.) The state police swept through town, conducting dozens of raids to little effect.

Politicians and police shielded the bootleggers, so often they were forewarned of an impending raid. And even if they were shut down, they were quickly reopened.

At least two mayors were sent to prison for their involvement in bootlegging. But typically, they were not vilified for their role in the supposed crime but viewed as martyrs.

When Mayor Rudolph Tenerowicz was sent to prison, the citizens of Hamtramck gathered thousands of signatures on a petition demanding his release. That was presented to the governor, who agreed to their demand.

Tenerowicz was set free and returned to Hamtramck for a hero’s welcome. A big party was held in his honor and he was presented with a new Dodge.

This may sound like a twisted sense of justice, but it was understandable at that time and in those circumstances. Prohibition went against the social fabric of the population. And you can’t expect a law that virtually no one supports to be honored.

If there was a great failing it was that Prohibition fostered related forms of corruption. Bribing police and politicians is never excusable, even in defiance of a misguided law. And like cancer, the reach of corruption soon spread, even invading the public school system, which nearly destroyed what had been one of the finest school systems in the nation. It wasn’t until the 1940s – long after Prohibition ended — that Hamtramckans finally had enough of municipal corruption and cleaned up the city.

As late as the early 1960s, police continued to find illegal stills in houses and garages in Hamtramck.  And there were still a few blind pigs tucked in across town. But it was nothing like the good ol’ days.

You can see a genuine illegal still on display at the Hamtramck Historical Museum. Stop by between 11 a.m. and 4 p.m. Saturdays and noon and 3 p.m. Sundays. The museum is at 9525 Jos. Campau, between Poland and Norwalk streets.

(Greg Kowalski is the chairman of the Hamtramck Historical Commission.)

3 Responses to The Lore of Hamtramck: Raising a glass to Prohibition