The weekend that should have been 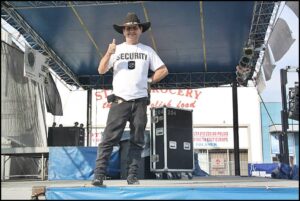 By Charles Sercombe
This weekend would have been Hamtramck’s last hurrah of summer.
But like so many other things canceled this year because of the coronavirus pandemic, neither the Hamtramck Labor Day Festival nor the Polish Day Parade will take place.
The events were nixed months ago. This is only the second time the festival has not taken place since it began in 1980. The first time was in either 2000 or 2001 when Hamtramck was under the control of a state-appointed emergency manager, Lou “Bud” Schimmel.
And not only is the festival not happening, many in the city recently learned that a festival icon, Alan “Tex” Booker, had died.
It appears he likely died sometime this year at the age of 70 or 71. At press time, there were no other details available about his death.
“Tex,” as everyone in town knew him, was a both a fixture and an attraction all by himself at the festival, and every year offered his services as a security guard.
Those commenting on various Facebook pages were saddened and shocked upon hearing of his passing.
Festival co-organizer Konrad Maziarz had this to say:
“It is with great sadness that I recently found out that Tex had passed away. As much as he would drive me crazy during the festival, he was always there, and he truly loved the event and this city, and he will be missed. Hopefully you’re finally enjoying the hoedown you always wanted this city to throw. RIP Tex.”
Colleen Burke spoke for many when she said:
“All of the city festivals will be less interesting without his presence.”
I think we can all agree that the year 2020 cannot end soon enough. So long, Tex, and happy trails.
While we mourn the loss of Tex, Heather Martin says the weekend festival can still live on in spirit this year.
All it takes is a little imagination, according to a post on her Facebook page.
“Walk around like it’s the festival, jam out tunes like you are having a BBQ, and eat Jell-O shots like you are really there! All local bands should do gigs on porches for those of us walkers btw!!!! Social distancing (on) sidewalks a must! Lol!”
Sept. 4, 2020

One Response to The weekend that should have been