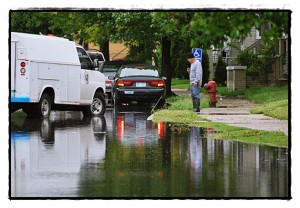 Last spring's citywide flooding was one of two flooding events that lead to a class action lawsuit filed against the city.

An attorney representing Hamtramck residents in a lawsuit against the city over flooded basements, says many of the plaintiffs will receive $4,000 to $5,000.

That’s a far higher payout than what city officials are spinning. Several weeks ago, City Attorney James Allen told the City Council that most of the plaintiffs would receive about $250.

That payment, Allen said, would cover what each plaintiff – and other homeowners – will pay in a court-ordered special tax to cover the $1.6 million settlement.

The plaintiffs’ attorney, Steve Liddle, said the city is also wrong to assume that there are over 400 residents who are part of the lawsuit. Although over 400 had initially said they were interested in the lawsuit, only about 200 submitted the necessary paperwork to receive a payment, Liddle said.

(Editor’s note: The Review placed several phone calls to Liddle in the past several weeks. He never returned a call. He recently agreed to talk with The Review because the lawsuit is now settled.)

Ginny Petzold of Poland St. said she attended one of the informational meetings that Liddle’s law firm set up for the public. She said residents were told that by filing the lawsuit, it would force the city to repair the water and sewer system and ultimately prevent further flooding.

Petzold said she never followed through with the lawsuit, but she is angry that the flood water in her basement was contaminated with feces.

“I don’t want my neighbors’ poop in my basement,” Petzold said.

Liddle said that without the lawsuit, he doubts the city would be taking the initial steps toward fixing the system.

The city does not deny that there is a problem – a $60 million problem. According to an engineer hired by the city to look into the scope of repairs needed, Hamtramck sewer lines are not correctly tied into the main lines owned by Detroit.

Hamtramck’s hookup with Detroit’s lines occurred in the 1950s. It’s not clear why the lines were incorrectly connected.
As a result of this flooding lawsuit, Hamtramck is now suing Detroit for the improper sewer line hookup.

The city has applied for a $1 million grant to come up with an engineering plan to fix the system. If the city is awarded the grant, it will then have to begin repairs within five years or pay back the $1 million.

Liddle said the city could have avoided trouble by simply doing regular maintenance over the years, such as a power washout from manhole to manhole, and dumping in chemicals to kill tree roots.

Although there is no inexpensive fix now, and the city is hardly in a position to fund the repairs, Liddle said he will continue to file lawsuits until the problem is resolved.

“You got to fix the problem,” Liddle said. “You can’t have poop in your basement. This is the 21st century.”

One Response to There’s no end to basement flooding issue