There’s more to do in Hamtramck throughout the year 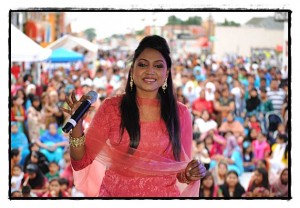 Come back to Hamtramck in the summer for the annual North American Bangladesh Festival.

If you’re visiting this city for the first time – or if you only come down once a year for Paczki Day – you’re not seeing the whole picture. Here are a few reasons to visit Hamtramck the rest of the year:

For the past 15 years, Hamtramck has been the go-to destination for music lovers of all kinds for the Metro Times Blowout, usually held during the first week of March. Though the event itself has expanded and the date has been pushed back to the last week of April, this unique, city-sized music festival is something every music fan should experience at least once.

In the first week of May, St. Florian Church unofficially kicks off the warm season when it hosts The Strawberry Festival. A tradition for over four decades, the event features Polish food, dancing, arts & crafts, and music from local favorites like Polish Muslims.

At some point over the course of the summer – usually in June – the Bengali community hosts the annual North American Bangladesh Festival. Held on Conant Street over the course of a weekend, this celebration is a cultural smorgasbord of sight, sound and taste.

Of course, it wouldn’t be Hamtramck without the Labor Day Festival, and 2013 should be no different. In addition to the music, parade, games and food, the weekend has grown to include a 5-K run and has resurrected the traditional “Campau Canoe Race” – something you have to see to believe.

Even if you can’t make it to town for a special event, there are still plenty of reasons to come back to Hamtramck. After years of development, it looks as if a network of bicycle and pedestrian lanes should finally crisscross the streets this summer.

And also after years of development – or more like a lack thereof – thanks to the settlement of a longstanding lawsuit the city can now take a proactive role in deciding what to do with its vacant lots. With about 400 total, there is a lot of potential.

Speaking of potential, a number of young people have finally realized all that Hamtramck has to offer and have begun opening up businesses. Shops like Chiipss (skateboards and accessories), Lo & Behold! (vintage items including music and clothes), and the pending openings of stores like Sticks, Strings and Other Things (music accessories and equipment) and Hammer and Cycle (bikes) are all operated by young people and are helping to revitalize the downtown.

Also being revitalized is Hamtramck Stadium in Veterans Park. As one of only five remaining home fields from the Negro Leagues still in existence, Hamtramck Stadium was placed on the National Register of Historic Places in 2012. There is currently an effort to restore the site to its former glory, with hope that it can one day host baseball and cricket games, musical performances and other community events.

Last but certainly not least, if you really want to get a feel for Hamtramck then come back during election season. A cast of colorful characters will undoubtedly be on the ballot for the Primary, and there’s no better way to learn about a city than meeting the people who care enough to run it.

Hey, you can always get a sneak peak of the last one on Paczki Day at the New Dodge Lounge, where Councilmember Cathie Gordon will be the one walking on the bar pouring shots directly into people’s mouths.